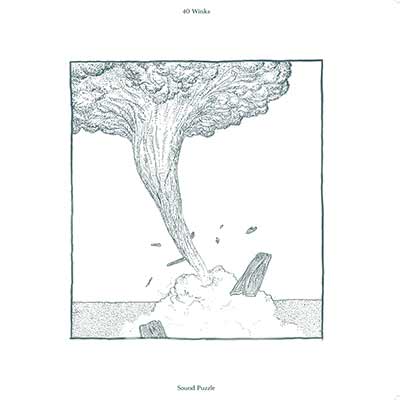 Sound Puzzle was originally released in 2007 on the now-defunct MERCK Records. At the time, it was released in a limited run and wasn’t a runaway success.

But 40 Winks, a Belgian duo, has gone on to have a successful career in experimental instrumental hip hop, using the ideas on Sound Puzzle to realize their sound and lay out the foundations that they would continue to play off for the next decade.

Sound Puzzle is an amalgamation of many influences, which may be obvious from the title, but what’s impressive about the record — and 40 Winks as an artist — is how it manages to merge all these sounds and make something cohesive out of it. It’s weird, but not in a way that makes you feel uncomfortable — that weirdness is what makes it unique. The record makes for a compelling Saturday morning lounging at home.

The music also feels as if it tells a narrative, thanks to some well-placed vocal interludes that tell something of a story behind a husband and a wife. The music follows the narrative thematically, and as the marriage begins to deteriorate, the beats and loops become a little more rhythmic and tense.

This makes Sound Puzzle feel like an incredibly coherent album; you shouldn’t skip tracks or be selective if you want to hear the whole experience. Amazingly, this still holds up despite the deluxe version’s additional tracks.

This could be because the additional tracks were originally included with the release in 2007, but in a limited edition print run of 100 cassettes. Times have changed though: with updated (and much more interesting) cover art, the record is now on vinyl for the first time (an infinitely better listening experience than a tape, of course), and those additional tracks are available for all of us to enjoy.