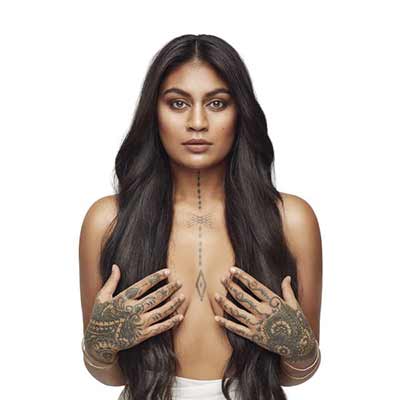 On Brown Girl, Aaradhna sings about her struggles with racism as a brown woman. But while it’s a record about the political, it’s also a powerfully personal statement — delivered with an impressive amount of bravado.

Brown Girl is, first and foremost, a beautiful collection of powerful songs. Every track is polished and refined to a tee, making it nearly impossible to ignore or leave on in the background. Brown Girl demands your attention.

It’s not solely because of the album’s quality, either: Brown Girl is a captivating personal and political statement that strikes the same notes as Beyoncé’s records. “Welcome to the Jungle”, the album’s first track, feels as much like a personal track as it does a personal one about navigating racial platitudes.

The title track is a career-maker, a song that works as both a single and a protest song. “I’m not just a brown girl in the rain. I’m a girl that likes to sing,” Aaradhna croons over the chorus. It’s a powerful message: Aaradhna uses it to deny and redefine the colour of her skin, her genre, and her measures of success (on a song that will no doubt garner radio play and more serious “best R&B track” nominations later this year).

In many senses, that track is going to come to define Aaradhna’s success and her career this year — and perhaps next. It’s worthy of every bit of praise it’s going to receive.

When she’s not blending political and personal so deftly, Aaradhna’s writing big pop hits like “Empty Hall” or the tender “Talk Sweet to Me”. She’s capable of jumping genres from one songs to the next, and she does it convincingly — without ever feeling like the songs don’t belong together.

Most of these tracks — the non-protest tracks, if you will — deal with heartbreak and the death of a relationship. I particularly love “Under the Blue Moon”, which is a playful blend of many blues and jazz elements with R&B overtones. “Drunken Heart, Smokey Mind” is similarly about unrequited love, but after the fact.

I particularly like the opening lyrics to “I Don’t Know”, the album closer: “I thought that if I gave this world my heart it would show. Still I don’t know, still I don’t know.” The sadness here is palpable.

But what I love about these songs of heartbreak is that they could as much be about protest as they are about love. It could be the sound of a heartbroken woman of colour: a woman who loves the world and is shocked by the way it doesn’t love her back.