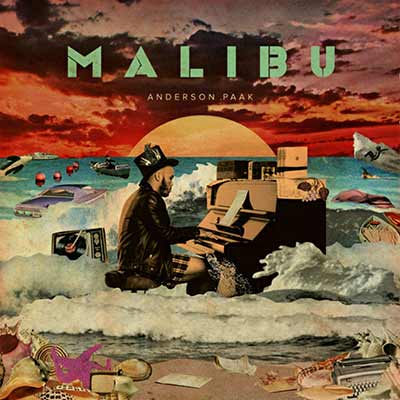 Anderson .Paak’s second album feels like a moment of triumph for the singer, as the polish in production and his songwriting abilities finally catch up with .Paak’s musical vision.

You may be familiar with Paak (his stage name is Anderson .Paak, but that’s not as readable) from his work on Dre’s Compton, where he guested on six tracks and was Dre’s “chosen one” the same way Snoop was on The Chronic. As a solo musician, though, Anderson Paak plays to a different audience.

Malibu is smooth R&B all the way down, but it also defies categorization thanks to its hip hop guests and jazz affectations. The Waters is a fantastic example of this leaning: Paak doesn’t sing his way through, but instead raps through verses and has BJ the Chicago Kid guest. Unlike most rappers, Paak’s voice constantly feels like he’s singing, but this is most certainly rap — even if it’s accompanied by a backing choir singing the verse with him.

Songs like Put Me Thru feel like more traditional R&B, as does album opener The Bird, which is nearly Isaac Hayes-like. But immediately following it is a track featuring Schoolboy Q, which features Paak crooning and bringing the soul and Schoolboy Q bringing chorus-laden rap verses. (While we’re on the topic of Am I Wrong, I wouldn’t say every experiment on Malibu is wildly successful.)

In that sense, I can understand the comparison that Pitchfork makes with Malibu and Kendrick’s work, but in reality, Paak feels much more like BJ the Chicago Kid in his willingness to try new things and experiment. (Malibu and Butterfly do make very complementary records, though.)

Some tracks on Malibu are more successful than others, and reveal what Dre may have been mentoring Paak on with production and songwriting. Without You is wonderful, and Rhapsody’s vocal work pairs well with the laid-back R&B on hand here.

This constant blending and mixture that Paak is so expertly talented at makes Malibu feel like a multifaceted and multi-layered mystery. Anderson Paak is avoiding categorization, and aware enough of roots that he can embrace the familiar while combining a multitude of influences and experiences into something that feels like the future of multiple genres.

With the release of Malibu, it’s clear that Dre doesn’t necessarily feel he’s found a great emcee. It’s more like he’s found an equally talented songwriter and producer who can carry on his work when he retires. Paak is more than willing to carry that torch, and if Malibu is a chance for him to celebrate that accomplishment, it’s also a statement that he’s here to stay — and we ought to be grateful for that.