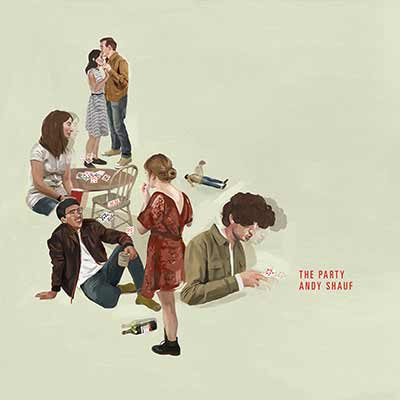 Recently longlisted for the Polaris Music Prize, Andy Shauf’s The Party is a wonderful indie folk record that captivates the same way Elliot Smith or Paul Simon records do.

The Party is an interesting record because, despite its title, it doesn’t feel particularly jovial. On his debut record for ANTI-Records, Shauf illustrates what I think we’ve all wondered: what the heck are all these people at this party really thinking? What are they talking about? Do they want to be here?

It’s an intriguing concept that mixes well with Shauf’s morore-sounding, baroque pop, indie folk stylings. It’s not far off from Father John Misty’s approach: a concept album about a loosely connected theme, but approached with an interest in its most mundane elements.

There’s a diversity of guests here that feels exactly appropriate for what Shauf is going for. On “Early to the Party,” a man arrives way earlier than necessary. At the end of “Twist Your Ankle,” he sings “Everybody’s laughing at me; I wish I just stayed home.” And the song brilliantly ends, quite literally, on that note.

“Alexander All Alone” is about a smoker who, on his last pack, suddenly keels over and dies. “Begin Again” is about being stuck with a friend who can’t stop bragging about how he’s cheating on his partner with the girl Shauf wants to be with — and Shauf pleads for the world to end rather than the conversation to continue.

Musically, it does end: the music reaches a climactic swell, as if the light has arrived to “dissolve [them] all,” as Shauf so desperately wants. It’s brilliantly well-realized, the musical stuff of indie pop dreams.

I share these songs specifically with you not because they’re exceptional examples from the album. Every song on The Party is worth hearing; it’s an exceptional record — one of the year’s best in its genre. But the songs I’ve described are great examples of the sheer amount of variety on display. Every song has as much of a personality as its characters do. For a songwriter self-releasing his first record on a “serious” label, that’s an accomplishment.

With The Party, Andy Shauf has matured and become one of Canada’s best singer-songwriters. It’s a treat of an album. I think you’re going to love it.