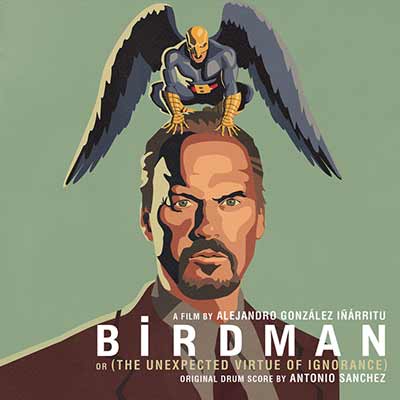 Not unlike the Academy Award-winning film this soundtrack comes from, Antonio Sanchez’s Birdman feels like one, long jazzy take on a single thought.

Birdman’s soundtrack is easy to listen through in one go, and then easy to put on repeat. Deceptively short, the soundtrack is loaded almost exclusively (save for the exception of a few classical arrangements saved for the end, which you could safely skip) with drum tracks. In its own odd way, the soundtrack is as disarming and surprisingly intoxicating.

Antonio Sanchez’s work builds on a single, looming tension, escalating until it breaks and a lack of sanity is revealed. And therein lies the rub of the film as well: you are listening to the slow de-tangling of a man.

Unlike Whiplash, its sister jazzy film from 2014’s Awards season, Birdman is not about feats of jazz strength, or virtuosity. It is about the act of performance. At times cool and suave, and at times suddenly broken, Birdman never sits still.

More interesting still is the way the soundtrack experiments with sound placement and timbre, matching the way the film does it. This may have been out of necessity, since the sounds and music in the movie often follow the movement of the camera, but in isolation, this is an especially interesting diversion from regularity.

And that’s what the whole soundtrack is about, really: it’s a diversion from the norm of film soundtracks. It doesn’t have an orchestra of any kind, electing instead to be more about the focus of a solo single instrument. It matches the film’s intensity, particularly because the drums can be both lively and under-stated in a single track.

People who haven’t seen Birdman may not get as much out of its soundtrack as those who have, but folks who appreciate subtle jazz experimentation will find a lot to enjoy here. Those who are more interested in flash and sizzle will quickly lose interest.