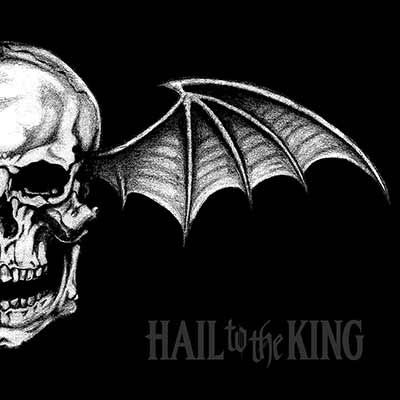 Hail to the King

Avenged Sevenfold’s Hail to the King is something of a Black Album-era Metallica rip-off, but I’d be lying if I said that wasn’t a welcome improvement from their old sound — and it’s remarkably listenable to boot.

I know, I know, it’s Avenged Sevenfold of all things. And the last thing I thought when I curiously decided to check out the group’s new record was that I’d write about it here. I used to listen to these guys all the time in high school, and even then they were a bad Metallica/Iron Maiden cover band.

Something’s changed though. Now they’re a good Metallica/Iron Maiden cover band. I mean, this album is basically a complete and total ripoff of The Black Album, which skyrocketed Metallica to stardom. I mean, your grandmother probably knows Enter Sandman and Nothing Else Matters. Well, compare Shepherd of Fire to Enter Sandman in structure and riffage. There are a ton of similarities.

Similarly, compare This Means War and Sad But True. They’re nearly the same song, especially that verse riff. I’m not complaining. The Black Album is one of the best hard rock albums of all time. I still listen to it, and I can’t say that about all the metal records I’ve got.

If you can get over the poser pretence of “It’s not metal enough!”, you might realize Avenged Sevenfold are actually great songwriters with cranked up Marshall amps and pointy guitars. Heretic sounds like Iron Maiden, and not even in a modern way. It’s vintage, like my old Alice in Chains teeshirt. And the title track is really making the rounds right now.

What really impresses me, though, is Acid Rain. It ends the album strongly with all sorts of emotional crooning and Guns and Roses-like bravado.

With Hail to the King, Avenged is straddling the line between hard rock your mom could listen to and hard rock with just enough bite to keep it cool. Check it out.