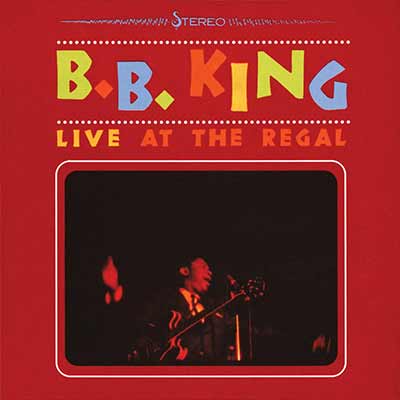 Live at the Regal

B.B. King’s left behind a massive legacy and an unbelievable discography, but Live at the Regal sums up what made him excellent in no small way. King was a faultless player and had loads of charisma. He shines on this live recording.

This week, B.B. King, one of the true blues giants of our world, passed away. To a lot of people, B.B. was a 89-year-old man whose glory days were way behind him. But in blues, things are different. Blues isn’t like pop: the older you get, the finer you become. B.B. King was a living legend, a man whose singing, guitar playing, and performances will go down in history as the best the blues world has ever seen.

I first heard of B.B. King when I was a young kid. I mean, heard of him, as in became truly familiar with him. I knew the name — every North American does — but an issue of Guitar World magazine was what really inaugurated me with his musicianship. I appreciated his playing then. Few people play guitar the way Buddy does.

As I got older, I learned to appreciate Buddy’s voice. Buddy sounds like the blues. Every blues singer owes something to him. His voice isn’t particularly “friendly,” but it’s powerful and carries serious heft. His voice, like his music, hits you below the belt. John Mayer might take over the charts, but B.B. King can take over your heart.

And then there was his charisma. You’ll never find a bluesman with more charisma than B.B. Live at the Regal is a great demonstration of his playing, his singing, and his live prowess. B.B. was an entertainer. He entertained America for almost 70 years, becoming the single most important permanent fixture in blues, rock and roll, jazz, soul, and even hip hop (to a certain extent).

I had a five part issue of Unsung Sundays planned for this week, but I decided to push it all aside to honour this incredible musician. I’ve also elected to share a Youtube link to Live at the Regal, instead of the usual affiliate links. I think we all need to put 35 minutes aside, and reflect back on the incredible contribution B.B. King made to our culture.

Thanks, B.B. Rest in peace.