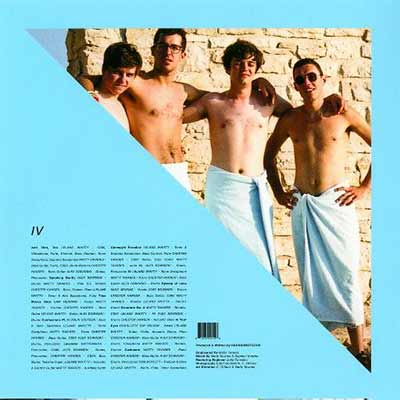 IV is BADBADNOTGOOD’s fourth record (perhaps obviously), and their experience is obvious from the first track to the last. With a spat of great guest performances and a well-balanced track list, this is a record you shouldn’t miss.

I feel the album truly kicks off with Speaking Gently (although And That, Too is a good warmup). There’s a clear chorus, beautiful solos throughout, and a sense of forward motion that forces you to sit up and take notice. Even when the album is playing in the background, you know when Speaking Gently is on. It’s pure jazz.

BADBADNOTGOOD isn’t some sort of jazz throwback, though. These guys are carving their own path, and they’re doing it with really great guest moments. Sam Herring’s guest performance on Time Moves Slow elevates the track, but Kaytranada’s spot on Lavender feels like a game-changer. His electronic movements support the band at all time, and fit in well with their jazzy modus operandi without overwhelming them — but his parts also add a certain amount of texture that’s absolutely blissful.

These guest spots, even though they’re not strictly jazzy, feel like they imbibe the genre’s playful experimentation and delight in surprise.

Even Hyssop of Love, which features rapper Mick Jenkins spitting vocal lines on the track, feels like jazzy moment. So much hip hop comes from jazz, and it’s neat to see them play well together. As the single hip hop track on the record, it feels out of place and it slows the momentum, but it’s also this oddly refreshing moment that occasionally recalls the best in jazz rap — like A Tribe Called Quest, Kendrick, and De La Soul.

IV, the title track, feels the most traditional on the record. For a moment, I thought I was listening to a cover of a Bitch’s Brew track. It’s all over the place and wild, and it feels as authentic as jazz can be.

For BADBADNOTGOOD, this record feels like a statement solidifying their place as some of the best — and trendiest — jazz players alive right now. IV is a monument to the genre, and one that fans and non-fans alike will love.