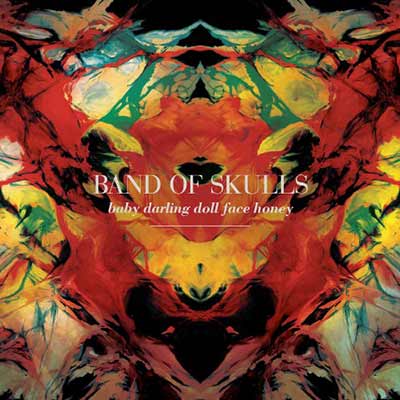 Band of Skulls’ debut album is still the band at their most charming, most inventive, and most playfully unique within the trappings of their blues rock influences.

About a week ago, Band of Skulls released their newest record, the perhaps-ironically titled By Default. Compared to their earlier records, By Default feels uninspired — which meant it was time to dig out Baby Darling Dollface Honey again.

Baby Darling Dollface Honey does something few bands can do: it carves out an original niche in the blues rock genre that the band easily squeezes into. With big guitar riffs and blues-influenced guitar licks, the album feels as inspired by the riffage of The White Stripes as it does the guitar licks of Buddy Guy.

Death by Diamonds and Pearls is a great example of the band’s agility, as they construct a verse that feels jurassic in scope and slowly bring the song to an explosive bridge that’s so clearly influenced by the mayhem of The White Stripes that it could be called a cover track if it weren’t for the guitar solo that follows.

Light of the Morning, the album’s opener, is worth mentioning too: the opening, with nothing but vocal harmonies in tandem with a bluesy guitar lick, is more memorable than the best tracks from most bands. It’s at once Black Sabbath and Zeppelin rolled together all at once, but it has the levity of The Hives.

I Know What I Am has a trademark blues riff with some great call and response going on between the two vocalists. Despite its obvious influences, though, it never sounds anything less than fresh. It’d be a great live track too.

Almost every track on the record is worth listening to, and the band’s wide array of influences becomes more obvious as the album goes on. By the end of Bomb, some of their metal influences have become a little more obvious too. The song isn’t heavy in any traditionally “metal” way, but at the same time it’s experimenting with some of the genre’s guitar tricks.

When the band slows down, it becomes clear Band of Skulls can be very intimate too. Honest is a great track that would sit well on something like Led Zeppelin’s III. I love the guitar sound, but I’m also a big fan of those harmonies.

That intimacy is what made early Band of Skulls so good, though. It’s not just that they’re good songwriters (although they are). It’s that the band was able to carry that sense of intimacy even into its bigger, more explosive tracks. Blood is as emotionally raw and open as one could expect from a blues track (and it’s a particularly excellent track). It feels like the band is performing right in front of you. It’s not the production, but just the band playing a clear passion.

That sense of intimacy has been lost on their newest record, I think. It’s something I treasure, and something that makes the band’s debut stand out among the pack — even seven years later. Baby Darling Dollface Honey is one of the best debut albums in recent memory, and at this point, could be called a verifiable classic.