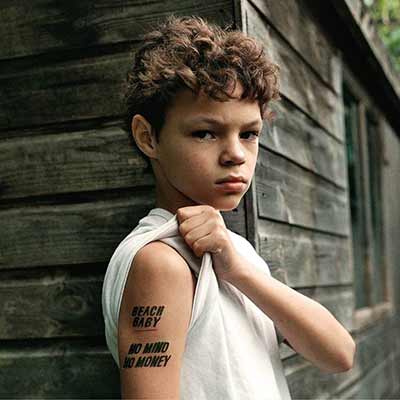 No Mind No Money

Beach Baby’s debut record shows off an impressive talent with a lot of rock swagger — and might be the shot in the arm that indie rock needs this year.

It feels like we’re in peak ’80s right now, right? Everybody sounds like they’re coming straight from that currently-hallowed decade. Beach Baby is no different. Their debut record, No Mind No Money, is filled with songs that wouldn’t have sounded out of place decades ago.

Beach Baby sounds influenced by everything from Noel Gallagher to Bono, with a heavy does of The Cure and shiny rock. Listen to “Sleeperhead”. There’s a heavy dose of Noel Gallagher here, but there’s also a bit of The Cure in there. The song doesn’t make any lyrical sense. That’s not a rub on the band — most great rock doesn’t make any sense. It just means they get it.

On songs like “Limousine” and “U R”, the band plays at full speed, rocking on riffs that shimmer with reverb-filled distortion. The band is most effective on songs like these, where they don’t sound bogged down by adult worries.

That doesn’t mean the glum tracks are bad: “Powderbaby” is one of the album’s stronger tracks, despite its gloomier nature. Like most rock bands, Beach Baby is simply best at faster, upbeat tracks.

But the songwriting here is almost completely unimportant. It doesn’t matter. After all, this is rock music. What does matter is swagger, attitude, and memorability, and Beach Baby has all three in spades.

The other day, I had to spend a bit over four hours in the car. I put Beach Baby on and, despite having only heard the record a bit over half a dozen times, found myself singing along with the songs. No Mind No Money is one of the first albums this year that I’ve been able to sing along to in the car.

And if that sounds like a small thing, I don’t think you understand rock music.

Rock music is at its best when the band has swagger, and people want to sing along. The genre is at its best when singing along makes it feel like you’re part of something bigger than yourself. Look no further than Oasis for proof of this. Successful rock music makes for great karaoke, nearly every time.

In that sense, it’s easy to proclaim that No Mind No Money is one of the better rock records to drop this year. It’s easy to sing along to the title track and feel something, even though the lyrics are largely nonsense. (It’s those nonsense lyrics that let us add our own meaning to the song, so that makes sense.)

So I’m of two minds with Beach Baby: I know that their record is, like most action movies, largely surface-heavy. There isn’t a lot of depth to these songs. Summing up the record is easy: “adolescent boys grow up and struggle with adulthood on tape.” But a record can be emotionally successful and viscerally rewarding without lighting the world on fire.

Beach Baby makes critic-defying music with audience-aware sensibilities. You can sing along to it with your friends. Rock music like this brings people and communities together, so No Mind No Money is exactly the kind of record we need to hear right now.