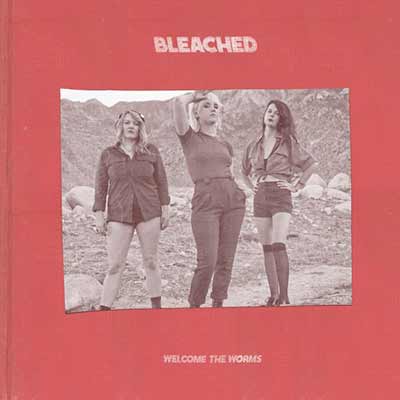 Welcome the Worms sees Bleached writing muscular rock songs with improved production over their debut — and the result is a more approachable album that doesn’t lose the band’s spunk.

The sophomore album from Bleached is not like Ride Your Heart, the band’s smashing 2013 debut. Welcome the Worms trades in much of their lo-fi punk aesthetic for muscular rock songs that will play well in stadiums and on massive tours. At first it’s jarring, and it took me a few listens to wrap my head around it.

But if I look at Welcome the Worms as if it were the debut from a new band, I’m left with an incredible collection of thunderously intense rock tunes. Almost every track feels like sheer muscle. Keep on Keepin’ On, the album opener, is clearly inspired by some of the band’s punk influences, but the riffs have more presence than ever before. Trying to Lose Myself Again is going to be one of the biggest party rock songs of the summer, by my reckoning, with really fantastic verbiage. “I’ve been getting high every night, trying to lose myself again,” Jennifer Calvin sings. It’s a call to party, delivered with all the spunk energy of a punk band and the sheer weight of pure rock riffage.

The guitar solos in Sleepwalking are new from the band (or at least better executed than the band was capable of before), and the lyrics feel better too. (Plus, bass solos!) And when the band does go punk on tracks like Wasted On You, they prove they still have what it takes. The improved production removes some of its charm, but you can’t kill off Bleached’s impeccable sense of melody.

Sour Candy is the song getting all the accolades here: it sounds as much like Phil Spector and Roxette as it does The Ramones. Its proof that Bleached is at their best when they put the melody front and centre. One of my favourite tracks, though, comes right after: Desolate Town is as punk as the band has ever been, with a gnarly three-chord riff that’s as evocative of The Misfits as anything the best punk bands have ever done.

Welcome the Worms is more approachable than Ride Your Heart, and while the former sacrifices some of the punk-leaning elements of the latter, it doesn’t ever sacrifice the band’s spunk. The album is a little less vicious, but just as vivacious. Fans might feel something has been lost in translation here, but I’d argue that Bleached was always at their best when they were at their most vivacious. They’re making broader music now, but they aren’t losing their personality in the process.