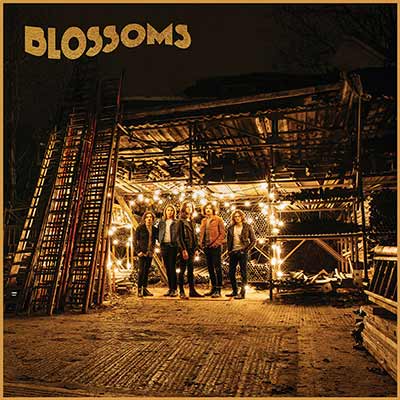 Blossoms is sweeping the headlines this week for their ’80s-rooted guitar-rock sound, but they’re more aware of their context than their peers. They might sound like another decade, but it’s so easy to root for them that it doesn’t matter.

On their debut record, Blossoms mines much of the same 80s inspiration as bands like Noah & the Whale or The 1975. Yet, despite what you’ve no doubt heard from the commentary surrounding Blossoms’ chart-topping record this week, there’s a lot of ’80s sound left to play with in a twenty-first century context.

“Charlemagne” is an astounding single, justifiably getting a lot of accolades from the media. But I think the band really comes into its own on the second half of the record. In fact, if you were to divide Blossoms in two with “Onto Her Bed” as the midpoint, I think you’d have two halves of a record that reflect a band still gripping with its identity.

That’s normal for a debut full-length record, but it’s also necessary for a band with the influences Blossoms has: how can you mine bands like Abba, Hall & Oates, Duran Duran, Pet Shot Boys, and The Wombats while coming up with your own identity?

The answer, I think, lies in how you mix guitars and synths. (And I think Blossoms agrees with me.) There’s no genre better at straddling the lines between pop and rock than ’80s disco/rock/pop. The genre had a history of blending these instruments and sounds together into a single undefinable mass, and Blossoms is trying to find their place in that.

The second half of their debut feels much more intent on finding the upbeat place where these things blend. “Blown Rose” blends guitar sounds and pop noises in a remarkable Beatles-esque way, and it works swimmingly. “Texia” is full-blown rock, despite its instrumental trappings.

When people rave about how much they love “Charlemagne”, they mean they love the sound of Blossoms when the band comes into their own. “Charlemagne” is easily the track that sounds most like the second half of the record. While the album’s first half is great (“At Most a Kiss”’s fantastic vibe comes to mind), the second half is where the band really comes to life. I can cheer for a band that writes songs as great as “Smashed Pianos” or the astounding “Cut Me and I’ll Bleed”.

Blossoms is separated from their peers because you can cheer for them. They have a confidence that reminds me of the way Oasis barged onto the scene. Unlike Blossoms’ oft-referenced peers, The 1975, who often (despite the quality of their music) feel like punk kids unaware of their context, Blossoms feel like a band that want you to cheer for them. They know what they’re doing. They’re not purposefully writing throwback music — it feels like they were entrenched in that era’s sound for so much of their lives that it comes naturally and authentically for them.

Blossoms is restoring your faith in guitar-based rock and pop: the band is aware of their history and having fun with it at the same time. They have swagger and soul, and their debut record has me cheering. You couldn’t ask for more.