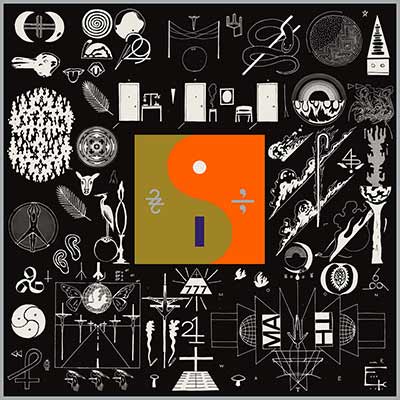 We’re as excited about the new Bon Iver album as you are — and trust us when we say it was worth the wait. 22, A Million is a game changer.

My pet theory is this: the weird track names on Bon Iver are purposefully meant to keep critics like me (and people like you) from participating in conversational discourse about individual tracks.

In other words, the track titles force us to talk about the album as a whole.

And as a cohesive whole, 22, A Million is worth talking about. Remember how weird it was when Bon Iver started singing on Kanye West tracks? It didn’t make sense then, but it does with 22, A Million. The transition is now complete. Bon Iver, Bon Iver was a stepping stone towards this, and in retrospect, it feels like an awkward sophomore attempt. This was always the future.

Justin Vernon interest in fusing electronic music and folk goes back to the beginning. And can you blame him? He recorded For Emma, Forever Ago on his laptop. Electronic sounds are an obvious direction to pursue.

Many of the tracks on 22, A Million exemplify this change. “10 d E A T h b R E a s T “, “33 ‘GOD’”, and “715 – CREEKS” are easy examples. What’s incredible about the tracks isn’t just Vernon’s unbridled creativity, but the fact that he actually pulled it all together. He made something beautiful out of all of this.

In a lot of ways, it’s fitting that we first got hints of this new Bon Iver sound from his performances with Kanye West. With 22, A Million, it feels like Bon Iver is trying to make a similar statement of creativity and power. This is Bon Iver’s 808s & Heartbreak. People might revile the record now, but we’ll look back on it with fondness as the turning of a corner.

If that comparison doesn’t resonate for you, it’d be fair to compare the album to Radiohead’s Kid A. It’s as if Justin Vernon said that too much of the folk scene sounds the same, that he didn’t want to add to the noise, and he wanted to make a change.

That change ripples through every track no this record. It’s almost impossible to talk about them individually. Lyrically, Vernon continues to be somewhat cryptic. But despite the distance that the electronics introduces, his voice feels more intimate and earthy than ever.

“8 (circle)” is a great example. Vernon’s voice makes it feel like the song is a private performance, but the electronics give the song a spacious depth it would otherwise lack.

It’s all so fitting for Justin Vernon, a man who seems bound to his neurosis of musical self-doubt, uncertainty, and reinvention. 22, A Million is a record about the ripples new sounds introduce, and the butterfly effects they create. It’s a beautiful record that’s reminiscent of watershed moments of the past, but only time will tell how we remember it.

As for me, I don’t want to be on the wrong side of history. 22, A Million could go down as Bon Iver’s first masterpiece.