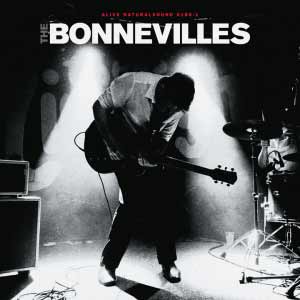 On my second listen of Arrow Pierce My Heart, Bonneville’s newest record, something stood out to me on My Dark Heart, the album’s second track: Andrew McGibbon Jr.’s singing reminded me, in a very visceral way, of many of the post-hardcore groups I enjoyed in high school and my early college years. Overtop of a bluesy garage rock guitar riff that Jack White wishes he wrote fifteen years ago, McGibbon shouts the chorus with all the ferocity of an untamed animal.

The comparison to White Stripes (and in some ways, The Black Keys) is very apt: not unlike their predecessors, The Bonnevilles are a blues rock band with the aesthetic of a punk-influenced garage rock sound. And to top it all of, the band is a duo from Northern Ireland featuring a guitarist and a drummer (Chris McMullen).

The Whiskey Lingers is another track reminiscent of vintage White Stripes, particularly its smashing chorus. Raging guitar riffs, aggressive drum hits, and more bring it all together — but not before The Bonnevilles bust out a dark blues riff that lingers like that shot of whisky they sing about.

It illuminates the difference between The Bonnevilles and their predecessors: The Bonnevilles have a darker sound that feels more primal and bluesy than White Stripes ever did. McGibbon’s guitar tone is darker and bassier, and has more in common with Queens of the Stone Age than it does Black Keys.

And they don’t always sound as rock-inspired. The Electric Company and I’ve Come Too Far for Love to Die are both blues jammers, with little punk influence, and it’s clear that the band know the genre well.

And what’s more, it never sounds like they’re vying to be a clone — in fact, they don’t sound like a clone of White Stripes or Black Keys. The similarities sound coincidental, as if The Bonnevilles wrote a thesis paper on blues-influenced garage rock and came to similar conclusions on the genre independent of other influences.

All of that is to say, despite obvious influences, it’s hard to accuse The Bonnevilles of ripping anybody off. When all of their influences come together, it’s a rousing success: I Dreamt of the Dead and Learning to Cope are fantastic songs that scream to be witnessed in a live show.

If the album has any sore note, it’s the closing Who Do I Have to Kill to Get Out of Here?, which is too messy and lingers too long after the album’s previous momentum. It’s a single wrong note in what’s otherwise a sterling album from The Bonnesvilles, who make the case that rock is far from dead — it just needs a shot in the arm.