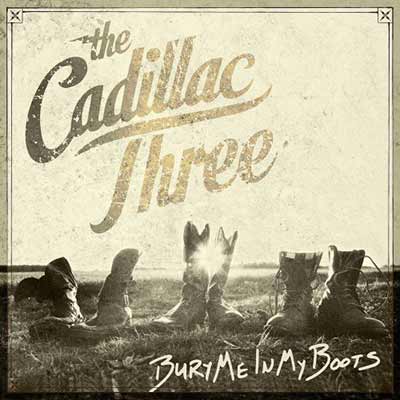 Bury Me in My Boots

If Brad Paisley is “Eddie van Halen on cornbread,” then The Cadillac Three is “Brad Paisley on Eddie Van Halen and Black Sabbath.” Bury Me in My Boots is authentic country music for rock fans.

There’s an aura on Bury Me in My Boots that makes it clear The Cadillac Three know where they come from: whether it’s the honky-tonk influence of “Slide” or the more traditional anthemic sounds of “Graffiti”, the band is aware of what country is all about. But on ragers like “Peace Love & Dixie”, the band (liberally) riffs off Black Sabbath and heavy metal.

Yet The Cadillac Three are one of the only country bands flirting with rock that don’t come off as sell-out losers. The band is never less than completely authentic — it’s hard not to like them.

Part of that is because the band continues country’s time-honoured tradition of being America’s most fun party music. There aren’t many of the genre’s mopey songs on Bury Me in My Boots; instead, the band focuses on party tracks like “Hot Damn” and purposefully corny lyrical accompaniments like “You put the ‘hot’ in ‘hot damn.’”

At their best, the band is able to capture elements of rock and country at the same time. On “Soundtrack to a Six Pack”, the band captures the twangy timbre of country with the musical techniques of rock groups — complete with big riffs and power chords. It’s incredibly effective.

The band also has an incredible track pacing throughout the record that balances the country-flavoured tracks and the rock tracks quite well. “White Lightning” balances “Soundtrack to a Six Pack” well, reminding more traditional-favouring country listeners that The Cadillac Three aren’t forgetting about them. It’s a tricky balance, and the band nails it.

The tracks that are the most fun are perfect for summer: “Ship Faced” is the perfect party (or hangover) song. “Party Like You” is the perfect starter for a night at the country bar. The afore-mentioned “Slide”, “Peace Love & Dixie”, and “Hot Damn” are party monsters. There haven’t been rock tracks this good all summer.

A lot of Southern rockers can do good party songs — Kid Rock does great party songs despite making terrible music — but The Cadillac Three are the real deal. These guys have exactly the right attitude, the right swagger, the right verve. There’s nothing about them that feels out of place or fake. The nicest thing about Bury Me in My Boots that anybody could say is that it’s approachable, real country rock that’s perfect for a wide audience on a Friday night. The genre doesn’t get better than that.