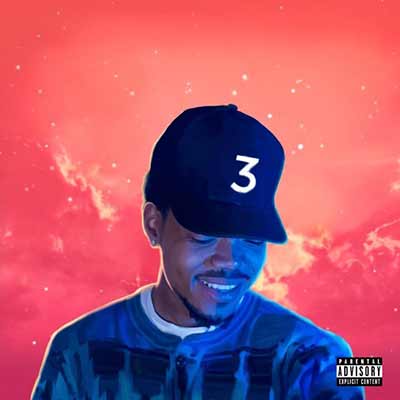 Chance the Rapper’s latest mixtape feels like the record that Kanye West’s Life of Pablo promised to be — and then some.

In some ways, Chance the Rapper is an acquired taste. Perhaps the most popular unsigned artist in the world outside of Radiohead, I’ve noticed that most people I know didn’t like him the first time they heard him (and they usually heard him guest rapping on their favourite musicians’ tracks before they heard one of his solo outings).

In that sense, he’s not very different from Kanye West. And his latest mixtape, Coloring Book, feels like a West record. Chance was West’s most promising protege, and the two still have great rapport. Kanye’s guest spot on Book’s opening track, All We Got, feels like a thank-you from Chance. No Problem feels like a track that would have fit perfectly on Graduation.

But Coloring Book isn’t Graduation: not unlike The Life of Pablo, it’s a hip hop record largely influenced by gospel music. There’s frequently a choir providing at least a backing track, if not sitting at the lyrical forefront. And very often, Chance has taken a popular hymn and remade it in his own image. How Great has a choir performing How Great (is Our God) as its opening, which anybody who grew up attending evangelical church will recognize instantly.

Of course, Chance adds his own spin on it: God and Dragonball Z become metaphors for what he’s trying to say about power, success, and blessings (obviously). Chance isn’t comparing himself to God — on tracks like Blessings, it seems like he’s aware that there’s a power above him.

It can all feel a little calculated, though: every line has been perhaps purposefully engineered for maximum tweet-ability. That’s not to say that Chance isn’t being authentic, but to say that he’s a new breed of rapper: along with Kendrick, he’s aware that what he says will be quoted and imitated and meditated on for years by fans. He’s a lyricist before he’s a rapper, and he knows the economy of a good quote.

It’s part of who Chance is. While his lyricism certainly adds to his power as an emcee, it also leaves me feeling like I’m part of a marketing plan. (I say this fully aware that it worked, and here I am recommend Coloring Book.) I have some complex, contradictory feelings about this,

Coloring Book is at its best when it slows down and becomes a pop record on tracks like Summer Friends, Blessings, Same Drugs, and Juke Jam. (Juke Jam is notable for having an excellent contribution from Justin Bieber, of all people.) Unlike Drake, Chance knows he’s better when he’s not trying to be a hardcore rapper, and he spends the majority of the time focusing on his poppier sensibilities.

One of Coloring Book’s strongest tracks comes at the end: Finish Line / Drown is an impeccably crafted track featuring legends like T-Pain and Kirk Franklin, as well as Eryn Allen Kane, my pick for the most promising upcoming gospel star. It’s also got Chance’s best rapping on the record. The gospel rhythm and sung chorus come together perfectly, and Chance’s vision crystallizes. Not only is the track compellingly written, but it’s also a lot of fun (in some ways, it’s reminiscent of Jackson 5).

It’s moments like that when the record leaps past Life of Pablo and races Kendrick’s untitled. unmastered for the prize of best hip hop album of the year. Chance is one of the few rappers who has seemingly limitless ambition, but doesn’t lose himself in self-serious. He’s making music that’s fun, but still important.

Coloring Book is the continuing story of a legend who’s pushing the limits of what’s possible without having the backing of a major label. Chance is ushering us towards the future, and he’s doing it by revelling in the past. It’s a can’t-miss record in a year that’s been full of them.