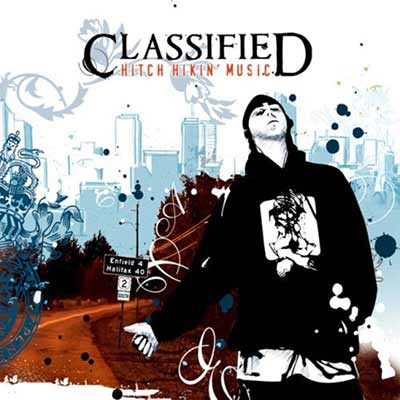 Classified is one of Canada’s best rappers, and Hitch Hikin’ Music is best record. Fun and funny in turns, with an air of confidence that isn’t over-the-top or subtle, Classified feels unique in a genre of copycats.

Classified is a Canadian rapper who’s been around way longer than it sounds. His most recent self-titled record, which didn’t come out too long ago, is pretty cool. But his best work, if you ask me, is 2006’s Hitch Hikin’ Music. Listen to Find Out. This is some seriously catchy hip hop.

I mentioned Xzibit last week, and Classified is ripping him off in so many wonderful ways in Hard To Be Hip Hop. Feeling Fine is just screaming vintage hip hop, complete with a great jazz-influenced lead vocal break that simply tears up the song.

Even when the album is a little more hardcore and taking influence from gangster rap, like with Cheap Talk and Eminem-influenced Put It All In Perspective, Classified is still having a lot of fun. Hip hop is one of those genre’s that should always be fun, but it drowns in in its own seriousness so often that the genre often just loses its appeal. But Classified is just having fun, and when I listen to Hitch Hikin’ Music, so am I.

Every single song on Hitch Hikin’ Music has an awesome beat and a great flow. This is what an underground rapper sounds like when he’s at his prime. The only issue I have with long hip hop records like this is that they’re usually filled with skits or fluff. In Classified’s case, this record doesn’t have either. There is one skit, but it’s also a song. Classified managed to make a skit all about writing a great song, and going through the process. It sounds stupid, but it’s amazing. Give Beatin It a listen. This is good stuff.