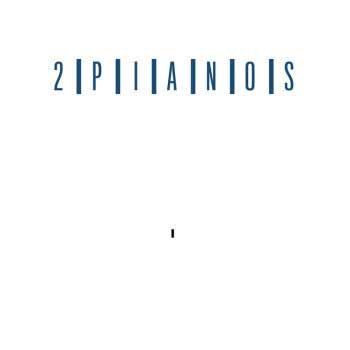 In the realm of modern classical music, Clem Leek’s new EP is comparable to Nils Frahms’ best work. But Clem’s piano compositions have more complex textures and structures, despite their laid back sounds.

I love the concept behind Clem Leek’s 2Pianos I. I have a snippet from Clem that explains it as well as I could: “As the name suggests, the EP was written for two players, both recorded by Clem. The idea was to create an almost seamless mixture of the two parts, giving the impression of one player. The delicate pieces are an expression of the need to think, consider and to reflect.”

I think the concept behind this is beautiful. It sounds exactly like what Clem is describing: these songs all sound like they’ve been played by one pianist. It’s a remarkable trick that requires considerable talent and more than a little bit of luck.

But regardless of that, the compositions are top notch. It reminds me of Nils Frahm’s Screws, which he recorded while he had a thumb injury that rendered one of his hands almost useless. As a result, the album was played with one full hand and only one or two fingers on the other. It gave the album a simplicity that it would never have achieved otherwise.

Somehow, 2Pianos feels similar in its qualities. Texturally, this has all the magic of Screws. It’s nearly surreal in its composition, with clear technical ability. But it’s also incredibly simple music that’s easy to grasp, even for modern classical newcomers.

What’s most impressive about 2Pianos, though, is that it’s able to find simplicity in the complexity of its parts. Clem has written these tracks for two players, but plays them as if they were one. That’s still four hands playing piano at once — twice as many as most piano records, obviously.

But by the time you hit “Yuri”, the final track, it never feels like you’ve been subjected to that level of complexity. Instead, the music has washed over you. It’s a cleansing, calming feeling. It’s almost a ritual. Yes, 2Pianos has nearly magical qualities.