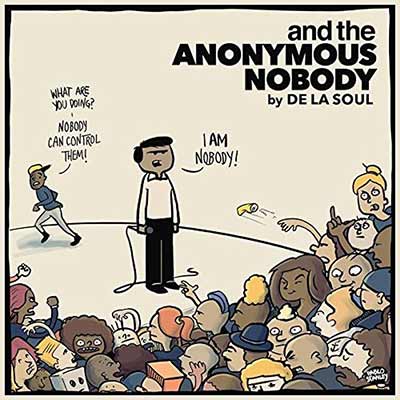 and the Anonymous Nobody...

On and the Anonymous Nobody…, De La Soul partners with a large roster of friends and records some of their most aspirational and imaginative hip hop yet — but the album’s true power is how it inspires us to chase our own dreams.

In early 2015, De La Soul returned in typically oddball fashion, using a Kickstarter campaign to raise funds to record a new album. Their goal of $110,000 was beaten within just ten hours. That incredible feat wasn’t just a milestone for De La Soul; their campaign was a big deal for Kickstarter too.

The results of that Kickstarter campaign are finally here, and they come in the form of and the Anonymous Nobody…, the hip hop trio’s first legitimate record since 2004’s The Grind Date. And boy, is De La Soul back: and the Anonymous Nobody… is one of the year’s most impressive hip hop records. It’s a wide canvas of imaginative ideas and well-written statements that capture De La Soul’s wit and creativity for a new generation of listeners.

When they’re at the top of their game, that’s exactly what and the Anonymous Nobody… does. “Pain”, the first single, has the vibe, lyrical approach, and swagger of vintage De La Soul. It’s the sort of song fans have been waiting ten years for. The following track, the jazzier “Property of Spitkicker.com”, sounds like a twist on their vintage sound. It’s trying to push boundaries and experiment with new sounds — all the things that we loved hearing De La Soul do before.

At other times, it’s easy to wish the tracks were longer than they are. “CBGB’S” is an album highlight, but ninety seconds is much too short for the track. It’s got such a great vintage beat, and it’s a shame to waste it.

But the album is enough to bring the best out of everybody: even Usher has a good track here, contributing an excellent vocal performance to “Greyhounds” that complements the rapping surprisingly well.

Everything comes together in “Exodus”, though, the final track and the song where the title of the record is finally explained. As De La Soul encourages people to chase their passions and their dreams, they sign off at the end as the “nobodies” who became somebodies. It’s an aspirational moment that feels like a reflection on a long, storied, successful career. Their message: if they can do it, anybody can.

We should have guessed that would be the message all along. and the Anonymous Nobody… was crowd-funded. If there was a metaphor for the fundraising process, it’s one of democracy. By contributing to the Kickstarter campaign, we decided as we wanted De La Soul to stick around. We decided we needed more music from them. And true to De La Soul’s point, it could have been anybody.

The music industry is becoming more democratic every day. Decades into their career, De La Soul are still leading the charge.