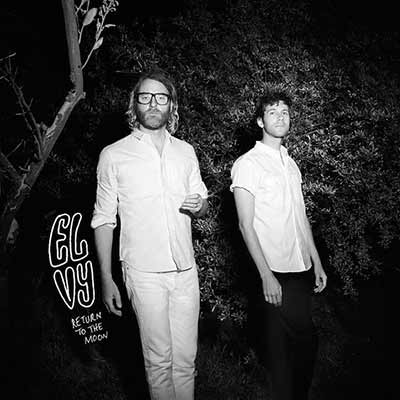 Return To The Moon

EL VY is a significant departure for both Matt Berninger and Brent Knopf, but it allows them to work, without the pressure of their more popular acts, at writing quirky indie rock songs. Return To The Moon benefits because of Berninger's trademarked voice, which gives it a lot of necessary bottom end, but the instrumentation is a wonky — and welcome — break from the norm.

You might not have heard of EL VY (yet), but you’ve almost certainly heard of The National. EL VY is the latest record from Matt Berninger, The National’s singer. He teams up with Brent Knopf (of Menomena) for the record, and things might not be what you expect.

For one, Berninger sounds like he’s actually in a good mood (most of the time). Or at least he’s not in the pit of despair. And the music reflects this. And unlike his baritone, Leonard Cohen-like voice might suggest, *this totally freaking works*. Actually, *Return to the Moon* might be the most surprisingly good record I’ve heard all year. This is some great stuff.

If it has a flaw, it’s that Berninger and Knopf let their foot off the gas a bit about midway through and Berninger sticks his head in the bin of sorrow again. Not to deride whatever he’s going through — I don’t mean it that way — but the rest of *Moon* is so delightfully subversive that sounding even a little bit like The National later on is like taking a few steps back from your own joke. No matter how funny it was, it makes it seem like an accident.

And I’m really hoping *Return to the Moon* isn’t an accident — especially not its glorious oh-my-gosh-what-wonderfulness-am-I-listening-to first half. Because I want more music like this in my world.