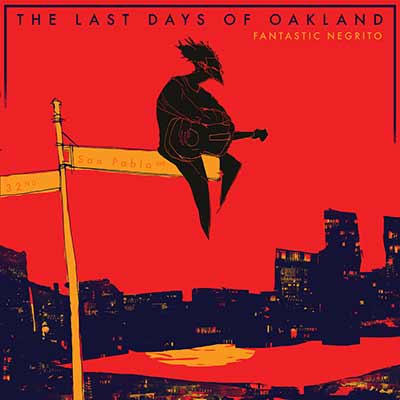 The Last Days of Oakland

Fantastic Negrito’s debut full-length makes him the hottest musician out of Oakland in years; the album is everything it was hyped to be and then some.

For an artist whose singles have gotten critics fully aboard the hype train, The Last Days of Oakland dropped with such little fanfare that you might have missed it buried in the bottom of Apple Music and Spotify’s “New Releases” section over a week ago. But this is a fantastic first record that builds on everything we’ve heard from Oakland’s latest phenomenon.

Much of the record is surprisingly different from what we’ve heard so far from Fantastic Negrito’s EPs. The song that will likely be most familiar to you is Lost in a Crowd, which was his previous single and a song that epitomized the style he’s already become known for: working man old-school roots rock.

The rest of the album is surprising, though. Working Poor is a fantastic introduction: Fantastic Negrito has always felt like blues rock for the under-privileged, but throughout The Last Days of Oakland, he elevates himself to singing songs about the black man’s plight. Working Poor fits that description perfectly.

The style is epitomized with The N***a Song and its prelude, What Do You Do (Interlude 1). Not unlike Kendrick Lamar, Fantastic Negrito is making music that is unaware of the injustice and violence towards black men. It’s stark, striking music that is as difficult to listen to as it is easy to enjoy.

In that sense, Fantastic Negrito feels like the Kendrick of blues rock and soul. He’s a black man who’s incredibly aware of the role race plays in his life and his music. Consequently, his music feels more important, essential even — and I think it is. The Last Days of Oakland is smart, meaningful, and important.

That’s not to say that Fantastic Negrito doesn’t have fun with his music. Hump Thru the Winter and Scary Woman both feel like lively music perfect for performance, particularly with Scary Woman’s impressive piano solo. It’s a contrast to his more politically aware work, but Fantastic Negrito pulls it off.

Nothing Without You is the most clichéd R&B track on the whole record, and it appears as the last song. It feels like the closest thing to a love song on the record, and after an album that feels both politically aware and nearly violent, it doesn’t fit. It’s a beautiful, tender song, but it sticks out like a sore thumb.

Perhaps it should be telling that Fantastic Negrito can ape so many styles. I can’t decide if he’s blues rock, R&B, or soul rock. But I know that his version of In the Pines is one of the blackest songs I’ve ever heard. It feels like slave music.

On Fantastic Negrito’s website, he shares his phenomenal story about a major label deal, a near fatal car accident, and a mangled hand. But he also calls himself “a man’s truth told in the form of black roots music” and “uncut realness.” Whatever genre you want to label it as, that’s an approach I can get behind. The Last Days of Oakland is absolutely essential listening.