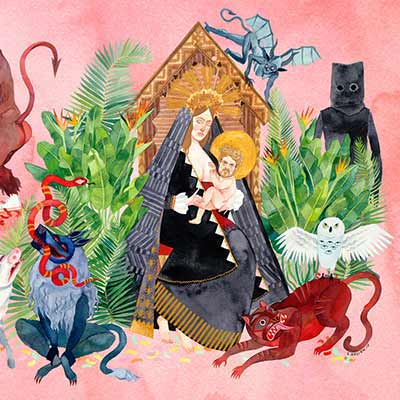 I Love You, Honeybear

Josh Tillman’s second album as alter-ego-but-not-really Father John Misty is a personal album that is passionately and infuriatingly contradictory, but also magically real and authentic.

I Love You, Honeybear is the second Father John Misty record, but this isn’t Josh Tillman’s second rodeo. Formerly of Fleet Foxes, Tillman is known for beautifully orchestrated folk music. I Love You, Honeybear has been met with nearly universal critical acclaim, and all the ink spilled over it is worth it.

The album is raw and honest, poignant and emotional, open and intimate. The album chronicles the early years of Tillman’s marriage, as well as his struggles with being American in the current economic and current climate.

It’s tender-hearted while being closed-off, loving until it’s suddenly dispassionate, tender until it becomes cynical — which is often how marriage feels, if you’re not married already and curious. Chateau Lobby #4 an ode to losing virginity and falling in love, while Nothing Good Ever Happens at the Goddamn Thirsty Crow and The Ideal Husband revel in their sarcasm and negativity. Bored In the USA is so openly cynical and depressing that it requires a canned laugh track to make it palatable, as if discussing being broke and miserable is something so horribly unfamiliar that we can’t laugh at our own knowledge of the subject without somebody to encourage us to do so.

But it’s also illuminating that, for Father John Misty, much of this is intimate and uncomfortable territory. The music in I Love You, Honeybear often serves as little more than a backing track for his Sufjan Stevens-like focus on lyricism, and Ideal Husband and Bored are both perfect examples. Misty sets the former to rock guitars to make the fears he has of being a horrible father less distracting. He sets Bored In the USA to a laugh track because it makes the uncomfortable feel comfortable, but it’s really more for him than it is for us.

And that makes sense: Holy Shit was written on his wedding day, and we get to come along for the ride as he exposes his deepest fears and joys to us. It’s not an easy thing for any artist to do: being human is messy, and not unlike I Love You, Honeybear, contradictory. Even though uses Father John Misty as a sort of alter-ego to make exploring these themes somewhat safer, Honeybear is an incredibly brave record.

It all pays off: we have a contender for best album of the year with this record, and its success on vinyl doesn’t surprise even a little bit. I Went to the Store One Day might be the last track on the record, but by the time Misty tells you the story of how his relationship with his wife started — and how it will end — you’ll be weeping. I Love You, Honeybear is a new standard in musical story-telling.