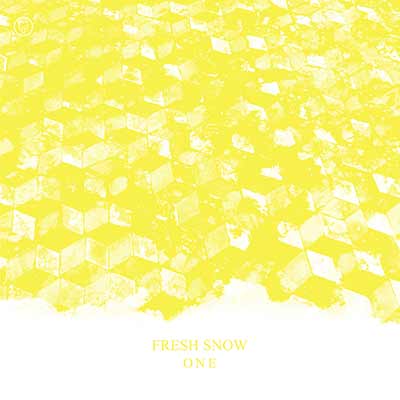 Fresh Snow’s second album is a tour-de-force in experimental post-rock, and a reminder that rock music can still sound fresh.

Does guitar rock have anything left to say? Radiohead didn’t think so when they made OK Computer. The genre was left behind years ago in pop culture. But thanks to a Krautrock-style and jazz-inspired take on improv, Fresh Snow thinks the genre still has something to say.

On One, their ironically-titled sophomore record, the Toronto outfit blazes through a set of (mostly) instrumental tracks. Often inspired by the psychedelic rock and heavy metal genres of the ’70s, but without ever aping them, One believes there are still uncharted lands and unanswered questions in guitar rock. The band improvs most of their music until arriving at the songs that you hear now on the record (and their live shows are supposed to be raucous musical events0.

Even on the rare vocal moments during the record, Fresh Snow is intent on mining those melodies in support of the overarching musical elements. Take “Mass Graves / Dance Caves”, which sounds like the dance track it’s perhaps meant to be spoofing. Using almost exclusively their guitars and a synth, Fresh Snow puts together a charming disco track. It’s great because it sounds like a spoof, but there’s something charming in its spontaneity.

I’m certain the band is more comfortable playing songs like “January Skies”, which apes psychedelic rock and Black Sabbath — along with a techno-inspired pulse — to create a sound that’s completely unconventional. It still relies on the riff, but it’s challenging our assumptions of where a riff comes from.

These songs challenge preconceptions of rock music. It’s easy to say that about most post-rock, but with Fresh Snow, the band playfully rearranges our notion of what rock music is. What’s more, they do it all without descending into electronica.

None of this makes Fresh Snow easy to absorb. Everybody talks about Fresh Snow as a Krautrock band. Krautrock was a German style of rock that was focused on improvisation. But the thing is, jazz came first.

Miles Davis was an improv guy (as were many of the greats who followed him). Jazz is the improvisational take on music — music’s greatest non-verbal connection to the spoken word. As a result, some of it wasn’t easy to digest. Miles Davis is responsible for the world’s most popular and approachable jazz record, Kind of Blue. But he’s also responsible for Bitches’ Brew, which is not a record you’d give to a jazz novice.

So much like the best jazz records, One is difficult to digest. Unlike most Krautrock records — which treat improv as an end rather than a means to one — One requires and rewards repeat listening. But that listening is rewarded by Fresh Snow’s ability to surprise. The album is a treat for fans of great rock and impressive instrumental music. It’s also a sign of Fresh Snow’s increasing importance in Canada’s rock scene.