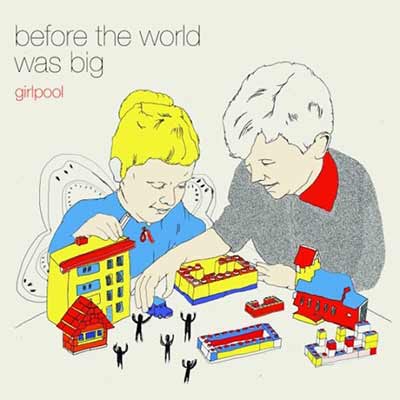 Before the World Was Big

Girlpool writes deceptively simple songs: although it sounds like a two-year-old could pound out some of these guitar riffs, the authenticity in their quiet punk approach lies in the punch of their harmonies and lyrical honesty.

Girlpool has this habit of reminding me of The Velvet Underground. Each song is short and straight to the point, and as far as lo-fi punk goes, it’s some of the most legitimate you’ll ever hear. The title track is awesome (side note: so is NPR Music, which you should all read), and a great introduction to how great this whole record is. I could keep this on all week.

What makes Girlpool so wonderful is their ability to sharply emote through their simplicity. Although their playing isn’t complicated — the most intricate guitar parts could be picked up quickly even by a newbie to the instrument — the album finds its power within that simplicity.

It takes a couple listens to notice, because it doesn’t feel completely strange, but Girlpool doesn’t have a drummer. Despite that, their songs still retain an impressive sense of aggression and vitality. While you could call the band folk, if you don’t at least label it as punk-inspired punk, you’re missing the most important part of their sound.

Punk, not unlike hip hop, has long given voices to the voiceless and the impoverished. That’s why, quite often, it feels as if some music is improperly classified as punk (or hip hop, for that matter). What matters with these genres isn’t so much the stringency of the instrumentation, but the performers themselves. In the case of Girlpool, it feels as if disenfranchised and confused twenty-first century women, often inexplicably removed from our cultural conversation, are being given voices. Girlpool are socially conscious, they’re mad, and they make great music. Not a bad combination.