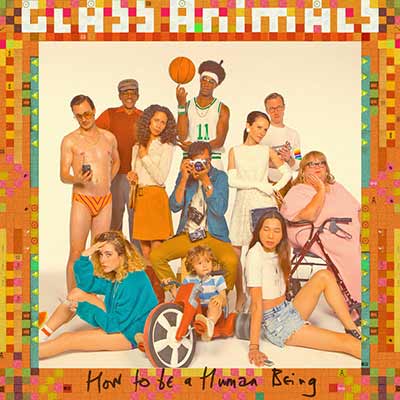 How to Be a Human Being

Glass Animals’ sophomore record is a sensational effort that builds on the successes of their debut and expands their musical vocabulary.

How to Be a Human Being has a much wider scope than Zaba, Glass Animals’ 2014 debut. There isn’t a track like ”Life Itself”, the opening track of Human Being, anywhere on their debut. Their sophomore effort has a sense of raw, kinetic energy that their debut didn’t.

I always felt that Zaba was the first record in its post-rock style to challenge Alt-J’s dominance in this ill-defined genre. On How to be a Human Being, Glass Animals surpass Alt-J to become, in my mind, one of the most inventive post-rock, alt-electronic groups out there.

How to Be a Human Being begs the question: How does one classify music like this? The pop structures, rock energy, and electronic sounds create a bizarre — but appealing — mix that seems eminently malleable and mineable for a new generation of musicians. How to Be a Human Being is a record of constant imagination.

Even people who don’t like Glass Animals couldn’t accuse them of being unoriginal. Every track on the record sounds different — compare “Pork Soda” to “Take a Slice”, for example. The band rarely, if ever, repeats themselves.

How to Be a Human Being has hints of everything from Justin Timberlake (“Season 2 Episode 3”) to blues rock (“Poplar St.”). It’s one of the most diverse records of the year. It’s a record that’s a result of touring, and all the new life experience that entails.

But at the same time as the band is rapidly — and aggressively — expanding their sound, they’re also doing something unexpected. How to Be a Human Being strips back the production slightly, dressing down the tracks compared to Zaba.

It’s a subtle effect, but it works nonetheless: despite Glass Animals’ continued experimentation, it never feels like they’re anything less than approachable.

To be clear: the production doesn’t sound bad, not even remotely. It’s still a well-made, well-executed record. But the production allows Glass Animals to make experimental, unusual music without ever sacrificing its listen-ability.

All that being said, it’s hard to discuss How to Be a Human Being right now. It’s the musical equivalent of The Empire Strikes Back: a sequel whose language is so different from what came before that it will take time to judge and understand it properly. I imagine we won’t fully understand the magnitude of this record until we can judge it within the full spectrum of Glass Animals’ complete discography.

That’s a good thing. The Empire Strikes Back was panned when it was released, but now many regard it as one of the best films ever made. Clearly, How to Be a Human Being is a tremendous record. It has the all the feelings of a masterpiece. But I don’t know if it’s a masterpiece yet. It’s too early to call it. (If it’s not a masterpiece, then it’s certainly evidence that Glass Animals is capable of making one.)

For the time being, How to Be a Human Being is an impeccable record. It demands your attention, and your repeated listening. And I can’t wait to talk about it a decade from now.