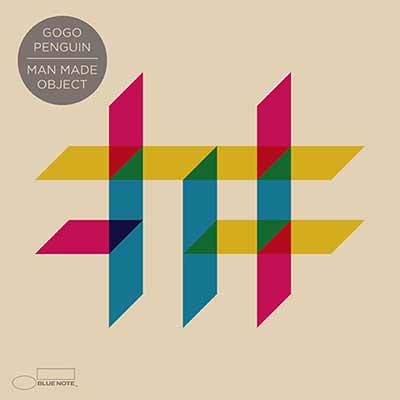 GoGo Penguin’s first album for Blue Note Records is an exuberant examination of electronic textures within the constraints of acoustic jazz. And in that experimentation, GoGo Penguin finds new ways to explore a genre that — for many — feels like familiar territory.

GoGo Penguin are taking advantage of a revitalization of interest in jazz among the public recently, and are using it to expand their sonic palette and prove that the genre can be as interesting as its modern grandchildren. Basically, GoGo Penguin are making jazz music for electronic fans.

The Mercury-nominated band, now signed to the legendary Blue Note Records, is known for its experimentation with acoustic instruments and electronic noises. Their playfulness with textures is arguably what got them that Mercury Prize notation in 2014, but on Man Made Object they take it to the next level.

The statement from Blue Note explains that the band wrote many of the songs with electronic instrumentation first, and then found ways to transpose it to piano, acoustic bass, and a standard drum kit.

It’s the groove that appears to fascinate GoGo Penguin. Although Man Made Object doesn’t have standout tracks in the traditional sense (and I doubt the trio is aiming for traditional senses to begin with), the album is at its best when the band experiments with the groove. Not unlike the best electronic music, they’ll unexpectedly change the groove and break with the previous time signature to drop the piano from a peak into a momentous, pounding rhythm — like they do by the tail end of Unspeakable World.

That makes it sound like electronic music, but I would never classify it that way — although their interest in the textures of it is quite clear. In the end, though, experimental jazz has always been about textures. Exploring those through electronic music is interesting, and GoGo Penguin have carved a unique identity through that exploration, but ultimately it’s still jazz music. Jazz music has always encouraged exploring. It’s just that GoGo Penguin have found a different way of doing it.

And it sounds darn great.