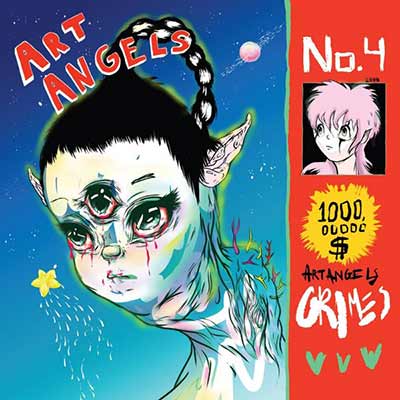 Despite remaining lovingly spastic and experimental, Canadian artist Grimes’ fourth album is her most approachable.

For fans of Grimes, Art Angels was a long wait. Claire Boucher wrote the first few songs in 2013, and killed them off when fan reaction to a 2014 single called Go (originally written for Rihanna) was poorly received as being too radio-friendly by her fans.

So Boucher put Grimes on hold for a little while to come up with new material. When the material did flow, it really flowed: there were over 100 songs written for Art Angels, most of which I don’t think we’ll ever hear — and Boucher has made it clear that these tracks are all part of Grimes records we wouldn’t be interested in anyway.

The result of all this writing, re-writing, and experimentation is Art Angels: a celebration of pop set against Grimes’ hallmark sunny sounds and weirdness. The opening three tracks are worth listening to as examples: an instrumental opener that’s simply bizarre leads into the radio-friendly California before the whole thing explodes into the decidedly not-for-radio Scream.

Those three tracks serve as a wonderful synopsis of the record: pop tracks like Belly of the Beat sit against oddities like Kill V. Maim (which might be the record’s best track), often dwelling in some sort of strange tension that makes the entire record feel oddly balanced in its leanings.

Despite these seemingly opposing directions — one experimental, and one radio-friendly — Grimes is able to hold it all together with uncompromising focus and unbridled imagination. Ultimately, the album feels like it’s two steps ahead of everybody else: pop music that’s laser-focused on experimenting with form and style, often to the point of flying off the tracks, all while remaining accessible.

It’s a miracle that these songs are accessible at all, though. Grimes isn’t writing love songs: on Kill V. Maim, she sings “I’m only a man; I do what I can,” words that feel completely defiant to the male-driven institution that is pop music. Throughout the record, Grimes practically screams for her freedom as an artist, experimenting with post-electronic noises and genre-pushing ideas that are more like middle fingers than love letters.

The consequence of all this is that it feels like Boucher is entirely avoiding anything personal with Grimes. There’s a sense of detachment throughout the record: it’s massively ambitious, but it’s also clearly a performance. Boucher isn’t involved on as personal of a level. While the vision is entirely hers, the world feels like a meticulously crafted production of her Grimes alter ego.

It begs the question: can pop music, in its truest form, be more personal? Or does it require detachment? Is Grimes answering the question, or has Boucher merely discovered that Grimes is at the unique intersection of performance and experimentation that allows her to drag a genre forward at the expense of herself?

Regardless of the answer, Art Angels is one of 2015’s strongest records, and a glimpse into the future of pop in an age where anything is possible.