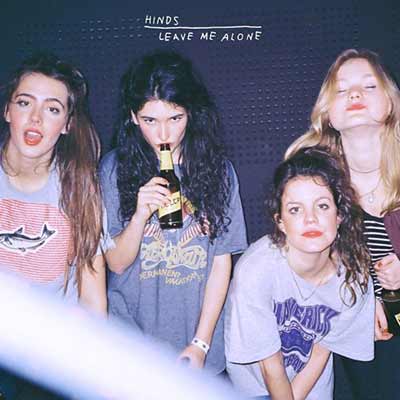 Hinds is an all-girl indie rock and garage band that also throws in a touch of surf and layers everything with some incredible multi-part harmonies. Not to mention, they're from Madrid. Their eclectic range of influences merge together and give Hinds' brand of lo-fi rock a unique twist.

Nobody seems to be able to decide what Hinds is. Lo-fi? Garage rock? Surf rock? Punk? All of the above? (Probably.) Let’s just call it alternative. Their debut record comes after a somewhat successful string of EPs and singles that had high emphasis on partying and having a good time (like a lot of what the garage rock and punk scene looks like right now).

Their debut record swaps out some of the partying for tunes about love and loss, but the band never seems to take it too seriously. That’s not a complaint; actually, it’s pretty refreshing to hear a band that doesn’t care so much and recognizes it as life being what it is.

I’ve heard a lot of bands like Hinds, but what really makes them unique is the camaraderie between lead singers Carlotta Cosials and Ana Perote. Where most duet leads work off each other with harmonies, these two ladies will sing opposing parts and let the music slowly build into a shouting match.

In other words, these two ladies are definitely punk.

But it’s their defining feature. It’s what makes them unique. And they sound awesome together, and the band is undoubtedly at their best when they’re just belting it out. Recommended.