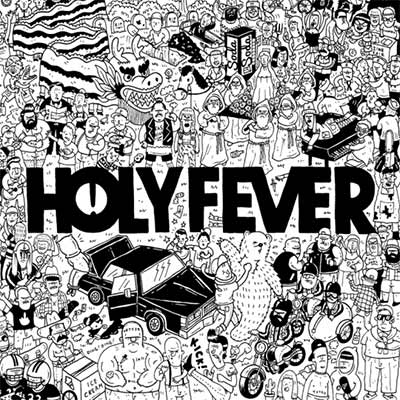 Holy Fever don’t waste time on their debut album before taking off into a Hives-influenced guitar riff and launching into a post-hardcore vocal delivery that’s among the best punk tracks of the past year. By the time is done, it feels like you just heard Dillinger Escape Plan cover The Hives. And it’s pretty awesome.

None of this happened by accident: Holy Fever, based in Los Angeles, is a sort of indie super-group made up of members of hardcore bands like American Nightmare, The Hope Conspiracy, and The Explosion. In fact, the only band member who isn’t a former hardcore rocker is Samantha Barbera (from the Beginners).

Barbera’s vocal work — whether she’s singing like an indie darling or providing the backing “ohs” and “ahs” of a chorus — are a gorgeous counterpoint to the guttural barking of Todd Cooper’s gruffly shouted lines. The two of them offer counterpoints, keeping the music interesting and energetic. Barbera helps Cooper avoid pummelling the listener into exhaustion, and Cooper helps Barbera from letting the music turn into another indie punk project. (It also helps that the whole record is only 34 minutes long.)

The title track is the closest the band really gets to standard indie rock, complete with a slower bridge and an ending that demands to be sung by the crowd in concert. But they’re at their best when the band is at their least predictable and most fun. The opening track, Duress, has all the magic of a White Stripes track and all the aggression of a Minor Threat track. Find Your Fame has both singers swapping parts like they’re playing hot potato, and it works.

Once in a while, the band elevates it to another level. The mix of indie and post-hardcore works really well on songs that Japandroid wishes they wrote, like Someday — which even includes a harmonica part, despite its shouted chorus.

Thanks to all of this, Holy Fever defies classification. Perhaps it’s easiest to describe them as party rock, music made by a group of people who don’t care what you think and just want to have fun. And The Wreckage is the perfect party punk record.