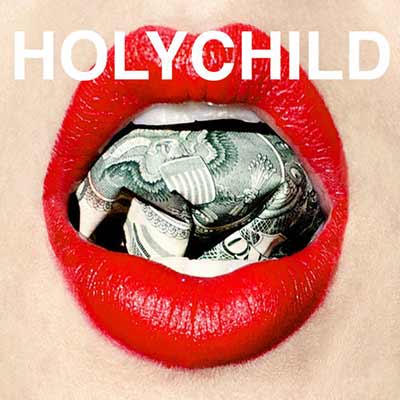 The Shape of Brat Pop to come

HOLYCHILD’s debut LP is a loud, brash, and angry statement on feminism, materialism, aging, and life in L.A. But despite the sexual aggression, the duo’s songs are unbelievably catchy and easy to listen to.

The State of Brat Pop to Come is a multifaceted title. It references the genre that HOLYCHILD believes they’re creating — “brat pop”. It’s also a reference to jazz saxophonist Ornate Coleman’s 1959 The Shape of Jazz to Come. Finally, it’s a lyrical statement that reflects singer Liz Nistico’s intentions with the record.

HOLYCHILD are a duo from L.A. made up of Nistico and Louie Diller, and on first listen, it’s no surprise that they’re from L.A. They sound like they belong in the Mean Girls sound track in front of Miley Cyrus and Taylor Swift, and they have the aggressive, Trent Reznor-inspired bass kick to prove it.

The Shape of Brat Pop to Come is filled with moments that feel lifted from many of their contemporaries, but it never feels clichéd or comfortable. Thanks to Nistico’s lyrics, it’s actually the opposite: the band feels like they’re on the precipice of what’s acceptable in pop culture, as they mock it for all it’s worth and scream about its insensibilities.

On Nasty Girls, Nistico sings “Hey! Hey! Give it up! We don’t matter anyway! Boys like nasty girls! Take him on a holiday!” That sexual passivity, placed against aggressive pop synths, veers towards uncomfortable, but it’s clear that HOLYCHILD has a point. Maybe it’s thanks to HOLYCHILD’s background in L.A., but the band is aware of misogynists and ready to give each of them the finger.

None of this is new; a lot of pop bands have come up with this message before. Few of them, though, do it with the consistent songwriting ability that HOLYCHILD brings to the table. Despite the theme being consistently in-your-face, perhaps to the point of making some conservatives feel uncomfortable, The Shape of Brat Pop to Come is almost always catchy, with rarely a missed beat.

The lyrics have the benefit of giving a band with an extraordinary amount of polish an ability to sound raw. The Shape of Brat Pop to Come is an interesting record that proves there are some voices left in pop music with interesting things to say. If HOLYCHILD can continue on their current career path, their future will be interesting indeed.