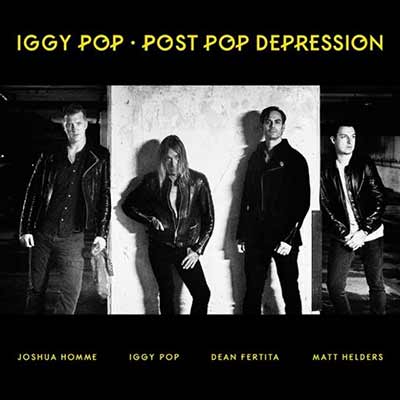 On Post Pop Depression, Iggy Pop’s final album (maybe) and his first with Josh Homme, the rock veteran has a lot to say about dealing with mortality and legacy. But can a sixty-eight year old punk rocker remain relevant?

Post Pop Depression was recorded in secrecy. Produced by the inimitable Josh Homme and featuring Dean Fertita (of Queens of the Stone Age and The Dead Weather fame) and Matt Helders (the Arctic Monkeys drummer), Iggy Pop looks to the younger forces in rock music to drive some of his existential angst.

Make no mistake, Post Pop Depression — if the album title wasn’t already a clear giveaway — is an existential album. Iggy is in full virtuosic form, with his genius — or Homme’s genius, because who can tell — on full display throughout. Iggy just plain old doesn’t care what you think anymore.

Josh Homme does, though. His production values are incredible on this record: the guitar notes are clear, the drums sound impeccably tough, and the bass hits hard. Homme has given this the same level of production he would a Queens of the Stone Age.

In particular, Gardenia reeks of Homme’s quality production and songwriting. Lyrically, it’s Iggy at his most torrid as he explains how he wants to tell Gardenia “what to do” tonight:

“America’s greatest living poet was ogling you all night. You should be wearing the finest gown, but here you are now — gas, food lodging, poverty, misery, and gardenia.”

And on Paraguay, in the record’s final moments, Iggy accuses the audience of being positively inhuman and tells them he’s tired of all their fear and insecurities. It’s pure Iggy — pure punk.

The inclusion of the other band members is vital, but confusing: is Iggy passing the torch to them? What’s next? When Post Pop Depression was first announced, the first thought I had was about how meta it was. Iggy Pop will come out and pass along the torch, making it clear who’s taking over the rock and roll establishment in his wake.

On Depression, though, Iggy doesn’t do that. He proves he’s still alive, pissed, and ready to take some names. If it really is his final record, it’s a great way to go. It’s an unapologetic admission that Iggy’s tired of being the guy America calls when it needs a friendly old-school rock and roller for an advertisement. It’s Iggy giving the establishment a big middle finger before walking offstage and riding a horse off into the sunset.

Instead of passing the torch, Iggy reminds us that nobody of the current generation can do what he does. He reminds us of his singular talent in front of the mic. It’s a reminder that nobody can do what he do. And maybe the significance of Post Pop Depression’s grease-filled, sexed-up angry sadness is that Iggy’s not ready to die with rock and roll — but he’s going to get out while the getting’s good.