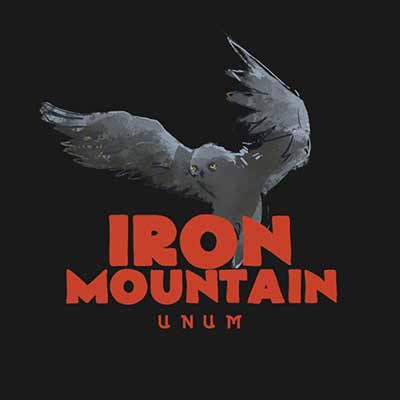 Iron Mountain might not be easily classifiable — calling them rock is too loose and calling them metal is overly specific — but their jazz-influenced take on instrumental Irish folk metal is a real joy.

Yes, you read that right: the easiest way to describe Iron Mountain is to call their music jazz-influenced Irish folk metal. It’s a descriptor that, to many, will be full of contradictions and lack clarity. But it’s a perfect description of Unum, released for the first time on vinyl last week.

Originally released independently (in small quantities) in 2015, Iron Mountain has since been picked up Prophecy Productions. The re-release features new artwork, but the songs remain the same.

Despite its short five-track length, Unum is almost fifty minutes long. It doesn’t feel as long as that: with a seemingly endless bevy of ideas, the band comes alive with each track, building them with successive layers of intensity. At moments, their sludgey riffs conjure memories of Black Sabbath or Mastodon at their gnarliest. A couple tracks are reminiscent of Metallica’s thrasher approach (particularly their instrumental work). Blitz reminded me of Iron Maiden.

Yet Iron Mountain is working entirely within their own framework. With flutes, fiddles, and pipes, there is jazz-like backing track happening here (Blitz being another great example of a jazzy bass line with some memorable solo work). The band is completely comfortable with their own identity.

Tracks like Powow begin quietly and slowly ease their way into distorted power chords, still using the higher-pitched flute and pipes and fiddles to cut through the bass-heavy tones of the guitar tracks and the drum kits. The song’s mid-point becomes a total riff-fest, but yet it never descends into simple chugging. Rather than going the route so many metal and rock musicians go now — high-speed chugging on low guitar strings to create an ominous, train-like sound — Iron Mountain forges their own trail.

It’s worth saying that these gentlemen really know how to play their instruments. The drummer keeps excellent time, and the guitar work is particularly intricate. But what really shines are the solos throughout, which are rarely played on a traditional instrument associated with the genre.

The sound Iron Mountain’s got going for them is unique. Thanks to their appropriation of many genres, Unum has more to reveal with every listen. If there was going to be one album you listened to over the next week (or month), Unum would have enough depth to make the cut. It’s also a refreshing listen for those of us who think metal has had little to offer lately; it’s a reminder that it’s still possible to do something original in what’s beginning to feel like a stale genre.