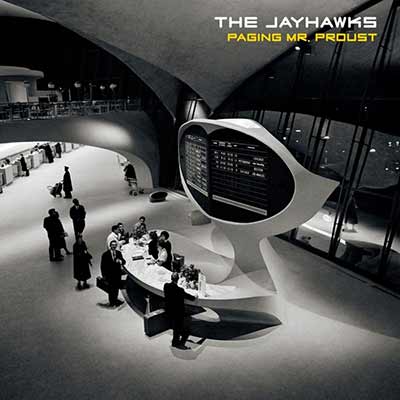 Paging Mr. Proust is The Jayhawks’ ninth record, and proves that whether or not Mark Olson is a part of the group, they continue to be one of Americana’s most consistently excellent groups.

The past few years have been rocky for The Jayhawks. Several years ago, original member Mark Olson re-joined the group and co-led it once more with Gary Louris. In 2011, they released Mockingbird Time and toured together. After that, Olson once again retired from the group, leaving Gary Louris to carry the mantle on his own.

Perhaps Louris and the rest of the band took that as a challenge, but the album feels distinctly focused despite it being a potentially late-career releases from the Minneapolis. Louis has been served as the band’s sole frontman before, and has proven himself capable, but the second loss of Mark Olson makes his leadership feel even more important than before.

To be clear, the band delivers here. On occasion, The Jayhawks remind me of an era of rock that has long since passed us by. Pretty Roses in Your Hair reminds me of Donovan’s Hurdy Gurdy Man and Rod Stewart’s (I Know) I’m Losing You — not thanks to its pace, which is lethargic by comparison, but thanks to its tonal qualities. The band simply sounds vintage.

A large amount of this is owed to the album’s production style, which is not vintage but rather dense: Paging Mr. Proust is not afraid to be thickly layered, well-executed rock music. While it’s much more country than Donovan or Rod Stewart, the band plays with many of the same elements. Some guitar solos, if it weren’t for the production quality, would be buried amidst the guitar licks. The vocal harmonies are reminiscent of both Beach Boys and Allman Brothers, yet remain consistently original and brightly executed.

For many people, the music will be perhaps too brightly executed and optimistic. Quiet Corners & Empty Spaces feels charming to the point of being annoying, and it’s an admittedly unusual start to the album. The album’s best tracks tend to come along in its mid-section, where the band is playing to all of their strengths without any expectations attached. Songs like Ace and Isabel’s Daughter are remarkable in their conception and flow — not to mention each band member’s individual abilities.

That’s a great summation of where it feels like The Jayhawks are as a band: when the expectations are lowered, it feels as if they rise to the occasion and surpass them. Nine albums into a sterling (if under-rated and poorly acknowledged) career, perhaps they should be given the benefit of the doubt.