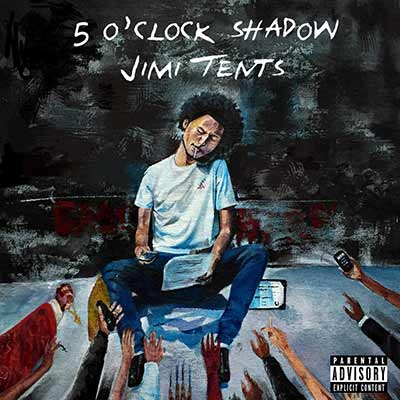 Jimi Tents’ debut is introspective and unique. On 5 O’Clock Shadow, he sounds like no other emcee in New York City.

And then Jimi asks, “If a body drop in the hood, and no one around, does it make a noise?” overtop of a kinetic beat. By the end of the song, he’s answered his own question, but it’s a provocative thought process.

Most of the songs on 5 O’Clock Shadow, which is a seven-song EP that feels as long as a full-length, deal with Tents growing up in the hood. This is East Coast hip hop though; it sounds nothing like the hood Dre grew up in. One spin of The Way (Intro) clears up any misconceptions; Jimi Tents isn’t hear to sound like one of his heroes. A melancholic bass line walks him onto the record, and that melancholy stays with him.

That melancholy suits his voice, which reminds me in some ways of the baritone sound of The National’s Matt Berninger. Both of them sound positively morose sometimes, almost like Leonard Cohen. For Tents, this is a sound uniquely his own in hip hop. There’s nobody else in New York who sounds like this, and I’ve read some comparisons to Kendrick.

Should’ve Called and Landslide (the most upbeat track here) feature the strongest rapping on the record. Tents’ flow is impeccable, but it’s interesting that he doesn’t often spit that way. As a rapper, he’s more interested in songs like Elmer Fudd and Jazzy, which slow the genre down and let him ask these introspective questions.

The questions lack some of the depth that the leaders in the genre carry. Elmer Fudd is a great track, but listening a second time doesn’t bear repeated revelations about growing up in the hood. 5 O’Clock Shadow isn’t the sound of a landmark rap record, but rather the sound of a rapper coming into his own and being confident in his own voice.

Jimi Tents’ debut EP is a pitch to hear more from Jimi Tents later. The pitch is successful enough that I vote we just give him a seat at the table.