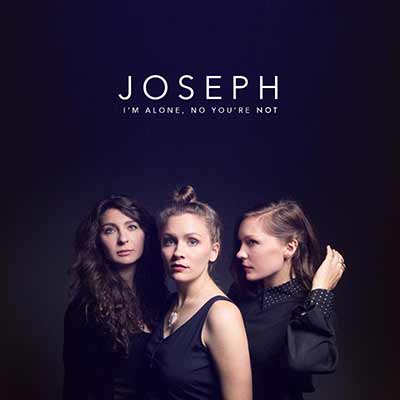 I'm Alone, No You're Not

Joseph’s I’m Alone, No You’re Not’s folk-influenced pop might be this summer’s clear indie darling — and it feels like they’re barely breaking a sweat.

It took me a couple listens to understand Joseph’s I’m Alone, No You’re Not. Their sophomore record sees them infusing pop and electronic influences into their folk music, which makes record number two for them both incredibly different and somehow a natural evolution from their previous sound.

The three sisters that make up the band are phenomenal singers (although I couldn’t tell them apart with a blindfold on). They sound like they’re both a church choir and a power pop band — which is to say that they easily find the sweet spot between musical intimacy and big, broad hits. And they make it sound so easy!

At their best, Joseph’s songs sound like “Planets”. These are Spartan exercises that use the sisters’ voices as both melody and atmosphere, eschewing the big elements of pop for a more unique (and mesmerizingly beautiful) approach. While the songs are quieter, they’re perhaps the most attention-grabbing on the record.

They pull off similar magic on songs like “I Don’t Mind”, which relies almost entirely on their voices to carry the tracks in lieu of a strong beat. When they bridge pop and folk so effortlessly, they’ve really come up on something special.

But I suspect that they’re going to be popular for indie pop hits like “White Flag”, “Canyon”, or “SOS (Overboard)”. These tracks celebrate their voices and have hints of their folk pasts, but they’re more like giant pop hits that could fill stadiums. That’s not a complaint; these songs work well, but are different stylistically.

There’s something about them that’s clearly reminiscent of bands like HAIM, with the trio of ladies and harmonies singing over swirling indie pop beats. But where HAIM often feels like they’re masterminding their production, Joseph often feels authentically vocal-driven.

By the time the intoxicating “Sweet Dreams” fades out and the album is over, it’s clear that Joseph is a band in between places. In the past, they were a folk band. In the future, they’ll be summer heroes in the indie pop scene.

Now, though? Right now, Joseph is still figuring all this out. I worry that they’ll lose the folk sounds that make them unique one day, but despite that — or perhaps because of it — Joseph’s I’m Alone, No You’re Not is a terrific and unusual pop record.