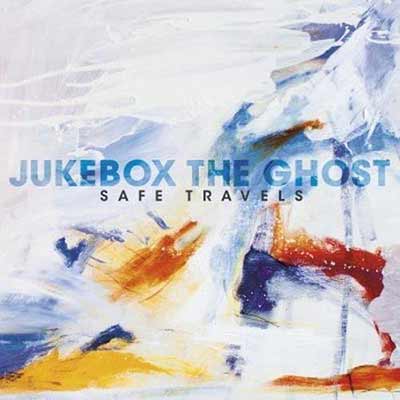 Jukebox the Ghost has put out one of the best records of 2012 with Safe Travels, a jubilant album that takes risks and surprises without ever dipping into experimentation that makes some people feel uncomfortable.

From the opening kick drum of Somebody, you know Safe Travels is going to be different. This is the best kind of pop record. It’s infectiously catchy, but also brilliantly written. It defines a summer with its rich melodies, but makes winter skies weep with its sadness.

Oh Emily is as fun a post-breakup song as you could ever hear, and At Last has all the charm of a modern romance (it really picks up in the middle or so). Say When is filled with smart songwriting and sensibilities, and a great piano line married to a catchy beat. (Coincidentally, you might have noticed Generationals’ Heza also has a track called Say When. Heza is also reviewed in this issue. I did not plan this.)

The album takes a turn halfway through, with Dead suddenly becoming very quiet, but it really resonates. Something about the shift in tone really works. Adulthood is sad, but true: “From adulthood, no one survives.” But it’s said with such poppy exuberance that it makes me want to dance. All For Love is bouncy and inventive without straying too far from a recognizable formula.

Everybody Knows would have been a sold album closer on its own, but Jukebox the Ghost’s choice to end the album with The Spiritual stuns me. It’s so different from everything else on the record, and so immediately somber, that it’s striking. It’s visceral in its immediacy. It’s reminiscent of Queen’s ballads, and there’s a couple notes where I suddenly feel like I’m listening to Freddie Mercury.

When the final track is done, and the silence enveloped me, I’m left sitting in awe. Safe Travels is one of the most cohesive and complete albums I’ve heard all year.