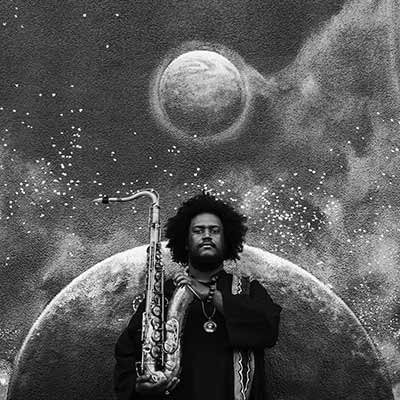 Kamasi Washington’s debut record is an epic in both title and length, but while it’s not short on running time, it’s also not short on ideas — often feeling like a crash course in jazz itself.

Three hours is a long time. At least, that was my first thought when I approached The Epic, Kamasi Washington’s debut solo record.

But then I listened to the album, and you know what? Three hours doesn’t feel that long.

The Epic truly lives up to its name: it’s 170 minutes long. Even on CD, it’s spread over three discs. (On vinyl, it’s three records with two sides each.) It’s long.

It’s also epic in a scope that goes beyond the track listing: Kamasi leads a ten-part group that includes names like Thundercat and Miles Mosley. And beyond those ten band members, there’s also a twenty-person backing choir — and a thirty-two piece orchestra. (But who’s counting?)

Despite all this, the album never falls under the weight of itself, which is an accomplishment. More importantly, though, it doesn’t feel three hours long.

Let me clarify a little bit here: three hours is a long record, and The Epic is very long. But if somebody told you they could tell you everything you needed to know about a topic, and it would take three hours, would you consider taking them up on their offer if the topic interested you?

That’s how The Epic is, except the topic at hand is jazz music. Over the course of three hours, Washington will inaugurate you with the basics and surprise you by teaching you some advanced jazz skills as well. The length of the record is a small price to pay for what you’re getting in return.

Washington’s been playing jazz with a lot of people for a long time, and he’s well aware of the form. In fact, The Epic includes some classic material. But what makes Washington so approachable is his ability to appropriate other genres into his understanding of jazz, giving the album moments that feel funk-inspired, or soul-like, or even influenced by hip hop.

It’s a unique combination only Washington could be blessed with, thanks to his extensive repertoire. Prior to this album’s release, he was most well-known for playing saxophone on Kendrick Lamar’s To Pimp a Butterfly. His hip hop influence is obvious. But for a moment, it looked like that would be what he was known for. The Epic will silence everybody who thinks of him as a one-trick wonder.

The wonder we see in Kamasi Washington and hear in The Epic are nearly inseparable from one another: Washington is the equivalent of a musical chameleon, playing phenomenal, complex music that pushes genre forms forward regardless of who he’s playing with. That ability to shape shift is so jazz-like, it shouldn’t be surprising that The Epic lives up to its name.

For once, though, it’s nice to be surprised: The Epic is epic non-ironically, and it’s going to launch a public conversation around jazz we haven’t had together in many years.