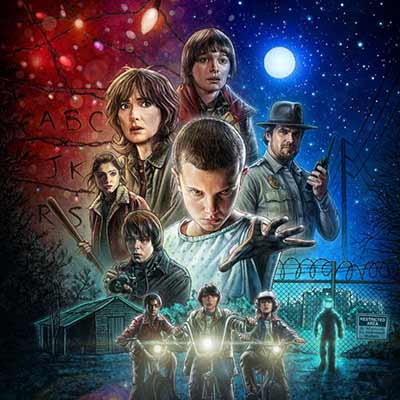 Fans of the show have undoubtedly come to love Stranger Things’s music, but the most surprising part the record is how well its ’80s synths sound without the visuals of the show to provide context. (There are no spoilers in this review.)

My wife and I aren’t done watching Stranger Things yet (no spoilers please!), but we’re undoubtedly impressed by so much of it. One of the show’s stronger elements is its soundtrack, which is as much an encapsulation of the ’80s as anything else is on the show. Synths abound, driven over quiet loops and electronica elements. It’s a reminder of a time gone by.

The Stranger Things soundtrack is basically techno before we ever called it techno: it shares the same basic structures and synth-driven loops.

Not every track is densely populated with swirling rhythms and beats either; after all, this isn’t a Trent Reznor track. For every pulsing track (like “Kids”), there are two like “Nancy and Barb” and “This Isn’t You”. On top of that, most of the tracks are quiet short — about a minute and a half, on average.

At once, these tracks are reminiscent about so many ’80s trends in music: there are strong elements of the Alien and Terminator soundtracks, but also a sense of playfulness throughout many of the tracks that feels influenced by the decade’s rock groups. Tracks like “Lay-Z-Boy” and “Biking to School” feel inspired by Duran Duran.

Other tracks are sinister, bathed in the neo-noir that the show frequently references. “Agents” has a lot in common with the theme song — particularly in its evil-sounding probing pulse. Other times, songs like “Lamps” are sinister due to their haunting mystery.

But what makes the soundtrack work as a cohesive album that you can listen to is the way it all comes together: tracks don’t often bleed together like they do on traditional soundtracks, but it feels like each one is a piece of a larger whole. And while the music is impressive, it’s particularly great for focused work, where its ambient beats can become part of the background without ever losing their import.

At its heart, though, the soundtrack for Stranger Things works because it’s evocative musically of what might be this year’s most fascinating television show. The Stranger Things soundtrack is a trip back to the sci-fi film soundtracks of the ’80s, and it’s incredibly successful at accomplishing this mandate.