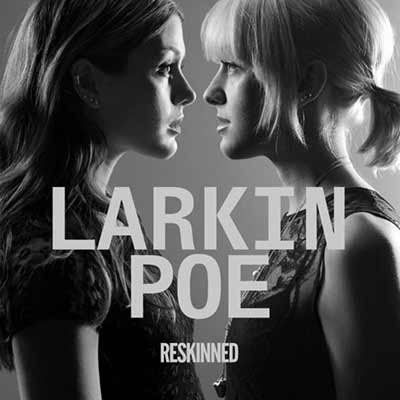 Reskinned is a collection of new material and old from a rising Americana superstar led by a sister duo — and the new material is riff-filled, delicious rock.

The opening track kicks off with a heavy, meaty riff that’s purer gold. At some points, the band sounds like rock-influenced country music of decades past. Don’t reminds me of country rock as much as it reminds me of The Roxettes, complete with a nasty guitar riff in the verse that’s just as heavy as anything Mötley Crüe ever put out.

That style, going back and forth between 80s rock and country twang, is something the sisters seem very comfortable with. The album’s strongest track, When God Closes a Door, perfectly captures the sound of a Wild West bar fight. It’s partially the guitar parts, but it’s also Rebecca Lovell’s brilliant vocal work: she doesn’t sing the obvious melodies, but she notes she hits feel perfect in hindsight. Her singing gives the songs a sense of atmosphere they wouldn’t have previously.

Trouble in Mind is clearly influenced by the Black Keys, with a riff and vocal line that feels like it was lifted from Brothers.

The album’s pacing, which is decidedly front heavy, can prove to be problematic when the Americana tracks from Kin, the band’s previous output, get tagged on to the end. Tracks like Stubborn Love and Jailbreak feel much less energetic than the rockier outings on Reskinned, and instead of looking for a new tracking that would make the new material part of a bigger whole, the label’s taken the easy way out.

Perhaps the new material would have made a better EP. But it begs the questions: is this the last time we’ll get to so clearly contrast two sides of Larkin Poe? What direction are the Lovell sisters taking the band next? If nothing else, Reskinned gets us excited to hear more from Larkin Poe soon.