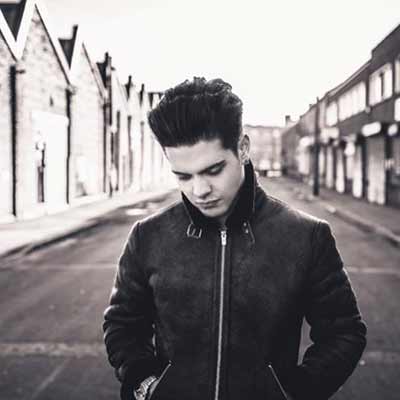 Lawrence Taylor's first EP is a crazy strong blues record tinged with all sorts of pop — reminiscent of many of the great singer-songwriters, but also with strong hints of John Mayer and rhythm and blues. While he's not necessarily stumbling onto anything new, Lawrence Taylor's already discovered a sound that really works for him.

Lawrence Taylor’s EP title doesn’t make it clear what his brief record sounds like: this is a vocal-heavy blues-influenced pop record with huge emphasis on a reverb-laden guitar and Lawrence Taylor’s powerful voice. It’s a great male accompaniment to the new Adelle record, and one that’s worth listening to.

While it might only be four songs, Taylor runs into an issue where the songs almost bleed together. I can’t tell if this is because of any limitations as a songwriter or if this is just the nature of a focused EP. While the album doesn’t feel thematically connected, it all carries a similar mood.

Lawrence Taylor also reminds me of Sam Smith, but he’s singing in a different register and writes songs that aren’t as depressing. He also sounds more aggressive and raw, as if the record labels and producers haven’t had a chance yet to smooth the little bits of black blues influence out of him.

And I think that’s the biggest compliment I can pay Taylor: while I wouldn’t mistake him for one of the blues greats, all of whom were black (due to the history of the genre itself), I can easily trace his influences back. And that’s really cool. It’s easy to put his EP on repeat and just let it do its magic for a day.