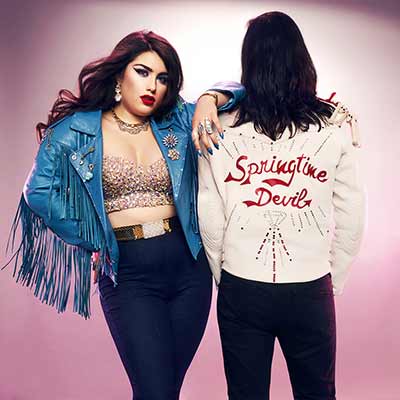 Les Deuxluxes’ debut feature-length EP has the charm of surf rock (similar to Bleach) and all the gusto and magic of garage rock’s best. (Yes, like The White Stripes. Who else?)

Sometimes, you hear something special — and you can’t say why it’s special. You just know it is.

Think about root beer. Have you ever met a root beer fan who doesn’t have an incredibly specific opinion on their favourite brand or variety of the drink? You might have drank hundreds of root beers, but you still know when you’ve found a special bottle of the stuff.

Why? It’s just got some kind of magical quality.

Les Deuxluxes is a “two-man” (one man, one woman) garage rock band from Montreal. You’ve heard music like this before (The White Stripes, The Black Keys, almost every other garage rock band ever). This isn’t the first time, or the last time, you’ll hear music from “a hip new garage rock outfit.”

But Les Deuxluxes have some kind of magical quality.

It’s more than their high-energy tracks (like “Queen of Them All”, which opens the record). There’s a magical quality to slower songs, too. Songs like “Bomb of Time” or “Bloody Queen” evoke everything from Led Zeppelin to Loretta Lynn, but have a spark to them that defies explanation.

That’s why I can say that I enjoyed “My Babe & Me” more than almost any other rock track this summer. There’s a spark there. I haven’t heard a spark like this since the early White Stripes records (obviously Elephant. I’m aware. I don’t care).

True, this is garage rock. I’ve heard plenty of music like this before. It doesn’t matter. Les Deuxluxes have a lot of charm, and a truckload of magic.

Besides, listen to “So Long, Farewell” and tell me if you’ve heard a single track this summer that has an ounce of the same amount of fun.