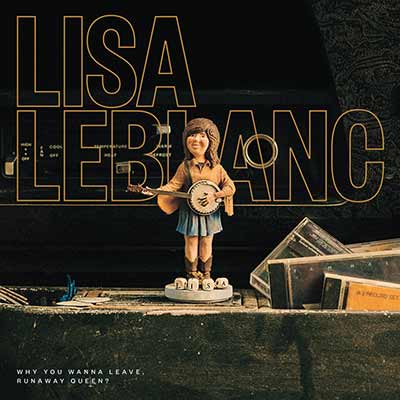 Why You Wanna Leave, Runaway Queen?

The self-described “folk trash” singer embraces her rock roots more than ever on her third album — a record so fun that it’s immune to criticism.

Sometimes, I wonder why I try to critique music. Critically considering music is different from a simple review. Anybody can review music, and Twitter would make a sufficient forum for that. A review should sum up a piece of art as “good,” “bad,” or “somewhere in between.” A critique is different.

A critique aims to consider the art’s merits, but it also wants to consider its place in the wider scope of form. In the case of music, a proper critical review should discuss the meaning of the music, and its relevance to either an artist’s oeuvre or general society.

There are occasions, though, when critical thinking is pointless because, well, nobody cares — and it’s irrelevant. Michael Bay movies (Transformers), Dan Brown novels (The Da Vinci Code), or Pokémon video games come to mind.

But today I’m adding Lisa LeBlanc’s name to that list.

Why You Wanna Leave, Runaway Queen? is an insanely fun album that I can’t possibly critique. I don’t know how to describe the magic spell it puts on me, but its delightful mix of Americana, old-school rock ‘n’ roll, and garage rock attitude hits me right where it hurts.

The truth is right in the track names. “I Love You, I Don’t Love You, I Don’t Know” is delivered with all the panache you’d expect. “Could You Wait ’Til I’ve Had My Coffee?” is basically a constant barrage of delightful rock attitude. And yes, the country-style cover of “Ace of Spades” is perfect — and Lisa LeBlanc’s voice is amazing.

I’d be remiss if I didn’t talk a bit about her voice. LeBlanc is an excellent singer with the room-filling power of Metallica’s James Hetfield, and all the lazy attitude of Lou Reed in his prime. Her punk-y voice is a delightful antecedent to her music, which is often twangy and country-like — even if she doesn’t fully embrace the genre.

It’s hard to categorize LeBlanc’s style, actually. Most people consider her folk, but she’s the first to acknowledge her rock and metal roots. She’s dubbed her music “folk trash”, which I don’t think fits her — but it does get the point across.

Her quieter tracks (which are rarer), like “5748 km”, are more apt to fit that term. But those quiet tracks are rare. Songs like “Dead Man’s Flats” seem quiet, but are insistent on their astounding breakneck paces. Others, like “(Self-Proclaimed) Voodoo Women” start slow, but develop roaring rock personalities in their latter halves. (These tracks aren’t unlike the epic metal tracks that doubtlessly inspired them.)

The point of all this is that it’s hard to call Lisa LeBlanc folk rock. She’s dangerously close to post-punk, or garage rock — if she’s not there already. And as her band gets louder, so does her sound.

If anything, Why You Wanna Leave, Runaway Queen? demonstrates LeBlanc’s completed transition from “folk trash” to “rock ‘n’ roll diva.” It’s not going to light the world on fire for its social commentary, but it’s immune to these criticisms because LeBlanc’s music is just so much darned fun. It makes you want to air guitar, dance, bang your head around, and cheer.

If you’re looking for a record that does that — a record that knows how to have fun and reinterpret the attitudes of the past with new sounds — look no further than Why You Wanna Leave, Runaway Queen?. A rollicking, rocking success by any measure.