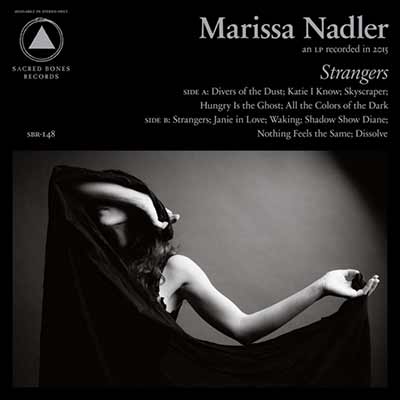 Marissa Nadler’s newest record is other-worldly and sees the folk singer branching out her sound, becoming slightly more accessible in the process.

Read almost anything about Marissa Nadler on the web and you’ll quickly find out that her music is considered an impenetrable wall of alienness. It’s as if she’s some sort of stranger on our earth, associating with us, but not one of us.

Much of that is owed to her music, which plays with distance and immediacy, and visceral qualities and intimacy. Even among other singer-songwriters, she’s unique, with the closest comparison being Angel Olsen (perhaps).

On previous records, Nadler has stripped her sound to be nothing more than her and a guitar, largely allowing her voice to be the most powerful part of a record. On Strangers, her heavenly (if sad-sounding) voice remains all that’s needed to make an impact, but she’s expanded the songs to include other instruments and a wider range of production techniques.

I read in an interview/review with Wall Street Journal that Nadler experimented with Logic on this record. You can hear it on some tracks, particularly the airy and expansive Nothing Feels the Same. Other tracks, like Hungry Is the Ghost, are expansive in different ways. Hungry includes an electric guitar and the soft beat of a kick drum in the background, building an incredible amount of tension.

When she experiments with the instruments is when Melissa Nadler feels the most alien and unlike us. She doesn’t use them in traditional manners at all, instead opting to sound ephemeral, as if the song were about to disappear away from our grasp and fade away — along with her. Even when Nadler’s vision of a guitar solo plays, it’s nearly buried in the mix, distant and haunting.

Katie I know plays with synths and a drum kit, offering a variation on the regular Nadler sound that still feels as bleak as ever. Janie in Love feels like a sound that would fit perfectly on the soundtrack to Fallout or The Walking Dead, with its deep and eery piano parts and distorted rock chorus.

Some of that might have to do with the album’s theme. Nadler isn’t the first to release a post-apocalyptically-themed album this year, but her music is certainly the bleakest about it. There’s little hope offered on her record, but there’s a strong atmosphere and a sense that there’s something beyond our own understanding of the world.

The best thing I can say about Melissa Nadler’s Strangers is that it encourages us to get lost, and to dream, in another universe. One where Nadler is queen and calls to all of us with her mysterious voice.