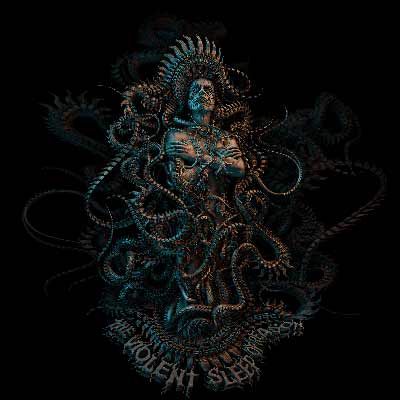 The Violent Sleep of Reason

Thirty years into their career, Meshuggah prove on The Violent Sleep of Reason that they still do progressive death metal better than anybody else in the biz.

The Violent Sleep of Reason is a whirlwind. Over ten spinning, math-defying tracks, Meshuggah absolutely slay with one constant groovefest after another. It’s their best record in years, certainly topping Obzen. But more importantly, it’s proof that Meshuggah still matter.

Meshuggah’s been around for thirty years now, so what could they still have left to prove? It turns out: quite a lot. This is the band who single-handedly invented progressive death metal. They brought polyrhythms into the genre, and proved that math could play a role in the music.

But since then, progressive metal has become a “me too” genre. Today, it’s filled with young upstarts offering sounds that are more populist than Meshuggah’s without sacrificing their technical strengths.

But the genre is also filled with perfectionists. Today, so many progressive death metal bands are using drum machines and computer trickery to perfect their sound that it’s becoe part of the de rigeur of making a metal record.

Not Meshuggah, though. For The Violent Sleep of Reason, the band played everything live in the studio. It’s proof that the band practices what they preach. It’s an impressive metal record, but more impressive is the band itself.

To my ears, this is also the grooviest Meshuggah has been in a long time. “Monstrosity” loosely borrows from Metallica’s “Through the Never”. “By the Ton” has some Pantera influence, notably in its verse groove.

These aren’t necessarily new sounds for Meshuggah, but they haven’t made music like this for a long time. Their records are technically proficient, often to the point of sacrificing the song for the sake of the instrumentation. But on The Violent Sleep of Reason, the music has a higher priority.

None of that is to say that Meshuggah is less proficient than they’ve been in the past. But it feels like the technicality is embedded in the music, and not the other way around. The rhythm section is as tight as always (which is impressive, given the bizarre polyrhythms and time signatures), and the vocals are as insane as ever, but most importantly, these songs are their best in over a decade.

Playing these songs live in the studio certainly adds another dimension to the record. It makes Meshuggah feel young again, like they have something new to say — even when they’re going back to basics.

And after thirty years, sometimes the most important thing is revisiting the basics.