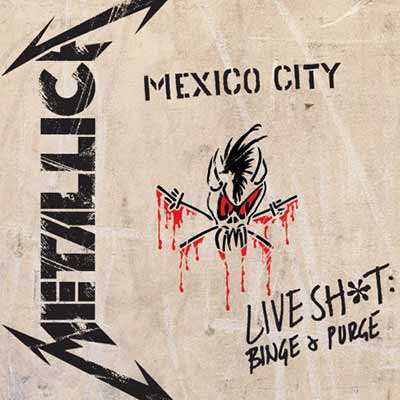 Metallica's 1993 live record feels like a best-of hits collection captured while Metallica was at their rowdiest, and not coincidentally, their most vile and least parentally appropriate. Also available as a three-disc live DVD from Amazon, fans will appreciate the time capsule, but occasional listeners will appreciate a look back into rock and roll's past, when megastars still commanded the world's biggest stadium and their craziest fans.

In 1993, Metallica put on a huge show in Mexico City to a sold-out stadium of fans who had never experienced a live show before. And at the height of their debauchery, skills, and fame, Metallica put on one heckuva concert. The results were video taped and recorded for all to see in this live set, which was originally a deluxe set of VHS tapes and CDs in a giant box. You see, this wasn’t just the first time Metallica had played Mexico City — it was also the first time they had put out an official (non-bootleg) live disc.

That makes Binge & Purge a time capsule of sorts: it’s the closest thing we have to real Best Of record from the group, and it’s the only great-sounding live recording we have left from this era of the band. (The next live recording Metallica released was S & M, a recording they made with a live symphony orchestra that unfortunately included too many of their post-Black Album songs for many fans’ likings.) This means that, as a great summation of what made early Metallica so great, Binge & Purge is essential.

It’s also, in retrospect, a sign of the reckless debauchery and cyclical addictions that the band members would experience throughout the next ten years before beginning the road to some of their recoveries during the recording of St. Anger. Frontman James Hetfield infamously throws a pint of beer on a well-meaning fan. The band disappears for fifteen minutes in the middle of a show, leaving hazed bassist James Newstead to play on his own until they return. (They call it a solo, but you just know they were backstage getting mid-show blowjobs from whatever women were around that night.) And while this drunken idiocy leads to some great laid-back moments, it also feels sad in retrospect.

Maybe I’m just getting old and missing the point though.