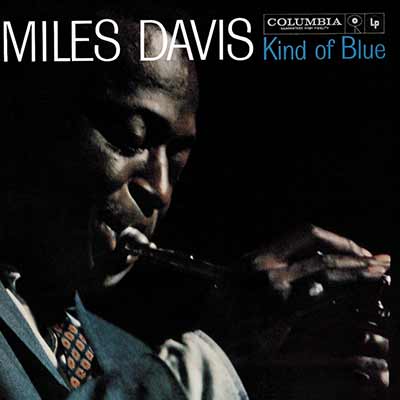 Kind of Blue is one of jazz’s best: it’s not afraid to challenge norms, defy expectations, and explore in a voyage to discover something new and ask questions about what jazz can do for the soul. An absolute classic.

There’s a story behind Kind of Blue that I really like: back in that time, bebop was really popular, and it was always improvised over. Miles Davis, whose team was the king of improv, found bebop a little limiting at a certain point because it was two fast. So Miles Davis booked two recording sessions, each a day long, two weeks apart. He called in his band and gave them each a chord sheet so they knew what to do, and he told them to improv over each song. And they slowed bebop right down, practically creating a new genre of jazz in the process.

The album only took two days to record, and it’s about 45 minutes of pure jazz bliss. Classics like Flamenco Sketches, So What, and Blue in Green might sound familiar today, but at the time, they were nothing short of revolutionary — and entirely improvised.

What more can you say about a piece of history that will go down as one of the best jazz records of all time? It’s hard to write about something that so many people have already covered, but it’s a jazz record with the soul of a blues piece. Kind of Blue could have been called King of Blues and nobody would have minded.

Kind of Blue should be a permanent staple in your library.