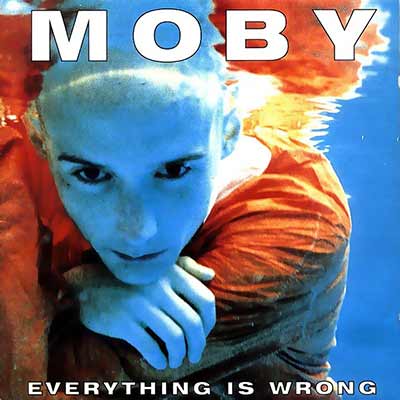 Moby’s best record is memorable for its mixture of pop hits and quieter, more introspective song. Years later, it’s still the best he has to offer.

If you don’t know who Moby is, that’s kind of sad — but forgivable. At the end of the day, most people will know him because Eminem called him out in Without Me during a feud and because he wrote the popular theme song for the Bourne film series. Others will undoubtedly know who Moby is and nod with appreciation about his inclusion in Unsung.

Regardless, Moby is releasing a new record in October called Innocents (Wikipedia link). I’ve heard it’s the bomb. In prep, you might as well listen to his best record, Everything Is Wrong. Some people are going to remember this album for the real trend-setting hits, like Feeling So Real or Everytime You Touch Me. Maybe they’ll remember it for the edgier tracks like What Love. That’s all cool, but for me, the album really stands out thanks to three quieter songs.

Into the Blue charms with its swooning vocals and driving bass. God Moving Over the Face of the Waters is self-aware of its beauty, but that’s okay because it is incredibly beautiful. But for me, the real star track of the entire album, the one that hits the hardest, is When It’s Cold I’d Like to Die. It sends shivers down my spine.