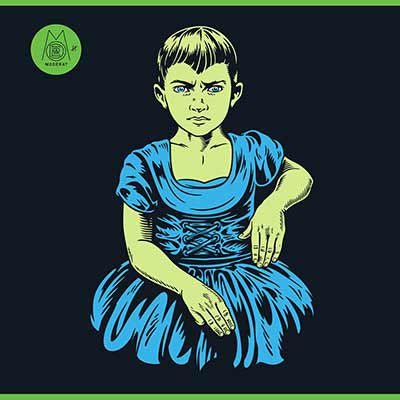 With III, Moderat is pushing the limits of electronic music while embracing even more of their pop influences — but they’re doing all of it with an ear for detail that Thom Yorke approaches Radiohead records with.

Moderat’s III hits its high point towards the end of the record with Reminder. It’s a track that sounds like an abandoned Thom Yorke single (or a Radiohead song circa In Rainbows). The verse is quiet and introspective, with an unusual beat and some fantastic sounds, before the loud synth takes over the chorus and brings the listener to immediate attention. It’s a dynamic, energetic track that feels like a hint of where Moderat is going in the future. It’s fantastic.

And that’s to say nothing of the rest of the album.

Moderat consistently has one foot stepping forward and the other looking back on this record, even with the cover art (clearly drawn on a computer, but only because you can see the pixels that reveal that to be the case). It’s an interesting contrast.

That being said, Moderat has become more of a pop group than ever before with this release: there’s little to no ambient elements of the record, and the group has focused instead on making pop music viewed through the veil of electronic. Some fans will undoubtedly cry foul, but this has been the mission all along (and Moderat has been preparing fans for the change since II).

As a result of the decision to sacrifice ambient tracks and instead focus on vocal-led work, III feels much more emotional than its predecessors. The highs are much higher than they’ve ever been on a Moderat record.

I think the opening tracks are the weakest on the record, and it continues to pick up steam towards its end point. I’m always surprised when an album’s best track is in the latter half of its mid-section, which is why I wanted to draw special attention to Reminder. In reality, though, the whole thing gets really good with Ghostmother, which has an incredible vocal performance that is both hauntingly human and somehow surreally electronic at the same time.

These tracks are the ones where Moderat decided it was now time to play with the notions of what people expect from an electronic record. The final track, Ethereal, is one of the album’s strongest, ambient thanks to its vocal work instead of the instrumentation.

In the 1980s, there was a movement where the last track of the record was reserved as both a summation of what the album was and where the band intended to go next. Intentions would often change later, so the last track was rarely a hint or a warning as it was thought to be, but it always seemed like such a novelty. Ending an album with a promise of what the future might hold always felt bold.

With III, it feels like Moderat is doing the same thing: as the album builds, it’s both a love letter to what came before and the sound of what’s coming from Moderat in the future. IV will be their chance to pull a Zeppelin and blend it all together. Ethereal promises something like that. Given the level of detail Moderat has always put in their music, I have no doubt they’ve thought this through. III is their strongest work yet, and its potential already has me excited for the next collection of work from the group.