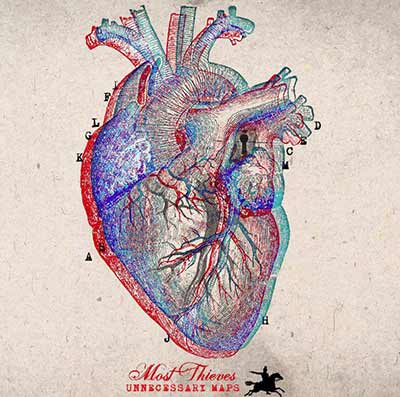 Most Thieves are an indie up-and-comer with a keen sense of how to write a stadium-friendly British rock song.

I’m not the biggest fan of anything The Killers made after Hot Fuss, but I’ve got a friend who likes them and saw them live recently. You know what he was talking about after the concert? Most Thieves.

These guys opened for The Killers, and they’re actually a really good band that deserves to be headlining some big tours themselves. There are subtle overtones of U2 sprinkled throughout Unnecessary Maps, and the songs are made for big stadiums and uplifting crowd cheers. Listen to Salt Lake City and Prometheus. These are huge tracks that would sound amazing in a stadium. Prometheus could have fit in on one of those old teen dramas that a lot of my friends were watching in high school (think The OC), but it also stands on its own as great driving music and fantastically loud rock and roll.

If you’re not hearing the Bono and U2 influence, please put on Glacial Places and just close your eyes. Honestly, if they layered the guitar work with a little more delay and reverb, we’d have a band that could be an honest-to-goodness possible successor to U2. And frankly, we kind of need one. Bonus points to this British band for calling a song Keep Calm and Carry On. If I wanted any one song to catch on with the radio, it’d probably be Holy Wars. This one’s worth checking out.