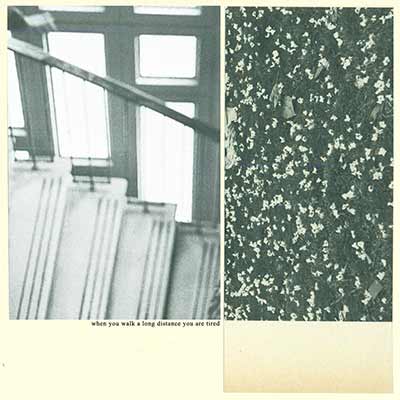 When You Walk A Long Distance You Are Tired

Mothers’ debut record is an album high on emotional fulfillment that’s almost difficult to listen to as a result, but also incredibly rewarding.

“I hate my body,” croons Kristine Leschper on Too Small For Eyes, the opening track of Mothers’ debut record, When You Walk A Long Distance You Are Tired. The quiet opener is unsettlingly therapeutic, and gives a clear impression that Leschper is about to fall apart.

Throughout the album, that first impression never fades.

Mothers’ debut moves from one style to another, dabbling in the baroque folk on Too Small For Eyes, but also playing songs that sound more like Canadian musicians Rah Rah (like It Hurts Until It Doesn’t or album stand-out Copper Mines). There’s a swirl of building tension in each song, shifting tempos and shapes as every song morphs from its beginning to its (usually) cacophonous end (Hold Your Own Hand being a great example).

But the star of the show consistently remains Krstine Leschper, whose voice sounds at once fragile, powerful, acutely sharp, and terrifying all at once. She has a habit of nearly whispering into the microphones, hitting notes that force her voice to crack, or refusing to let a note hang long enough in the air before she lets the guitars swallow it alive. She falls apart on the microphone.

The resulting record isn’t for everybody. Blood-Letting isn’t a crowd-pleaser of a song, and I suspect many people will think Leschper’s voice has an odd, screechy quality. But I think the band knows this. The whole record is drowned in treble, forcing everything to sound wobbly.

For Mothers, that theme of sounding broken, or like it could break at any moment, is sort of the point. They play to their strengths throughout, writing remarkably consistent songs that never falter from the album’s core strength of self-loathing introspection.

When You Walk A Long Distance You Are Tired is a debut record that sounds like nobody else in the genre. With the exception of Lockjaw (which is a great track), it doesn’t go after the hook or groove of a singles-filled record, and it’s not terribly catchy. WYWALDYAT hits on an emotional level that few bands ever succeed with, especially not on their first try.